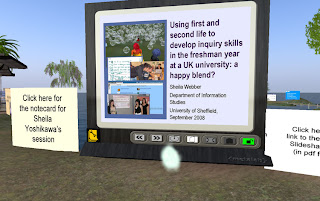 No of slides uploaded into SL: 44 (bad, probably); No. of notecards created: 1 (good); No. of hours in advance that set up ppt etc inworld: 3 (v. good); amount of access to island where am supposed to be giving talk: zero (v.v. bad)
Have spent long time putting together ppt, putting text into notecard, adding links etc, loading notecard into poster, uploading ppt to Slideshare and setting whole thing up in SL conference room on ISTE.
Started to try trick recommended by Sirexkat, namely creating a little object for each ppt texture, so that by the time you came to that slide people's computers would have already picked up teh texture. Neat, but it was taking *** ages to produce them and afraid gave up after the first 8.

Anyway was feeling moderately hopeful despite earlier pear-shapedness of some technical things, namely that streaming inworld didn't seem to work properly, one key speaker couldn't get inworld and had to postpone and I couldn't get into one of the venues. Hey, that's SL. Also felt it was pity that was manifesting only as cloud of vapour (so presumably people with earlier viewers were seeing hideous Ruth avatar), considering amount of time planning wardrobe. All that cute pinkness and purple, and all one can see is mist. 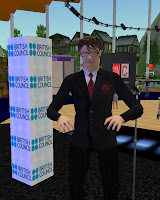 However became not inconsiderably concerned when realised that all efforts to get onto ISTE islands, any of them, were failing. ISTE as in, where am supposed to present. Decided to do something constructive, so set up ppt etc. on Infolit as could get there no trouble and presumably so could others. IMed one of organisers who confirmed that ISTE 1 had gone missing. Not something that happens in RL unless is some sudden natural disaster or you find self in middle of Dr Who episode.

Anyway am now out of world in sanguine mood. Organiser seemed to have preference for me moving to another set up venue elsewhere, but frankly would prefer to be on home ground. Hey Ho.

Before got into WTF mode I did manage to drop in on Baldric Commons talking about some quests. Interesting. Attention was caught by one about the Giant's Causeway in N. Ireland (I've been there! one might appropriately say that it rocks) where people have to find the salmon of knowledge. I can think of a few people who could do with finding that. Students have to take their pic with the salmon when they find it, to put in teh Hall of Heroes, and the overall goal is to increase interest in the English texts (Baldric is with the British Counil in Barcelona). There was also a time travel quest, in which scenes are set up which have anachronistic objects and people have to identify which ones they are.

In fact this session is only one have actually managed to follow so far apart from hearing some of the Lindens opening speech via the web. What will the next few hours bring? Who knows. By that time there probably won't be an audience left.
Posted by Sheila Yoshikawa at 11:30