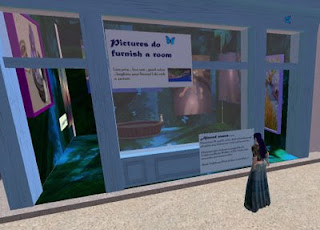 Exhibition in shop was rather overdue change, so took time to upload 6 pics which have nothing in common except were taken by me and have been subject to fairly heavy photoshopping. Is more dramatically colourful than usual, and therefore restricted set dressing to a bath (as featured in one of the pictures: experience the picture, then experience the bath! though now I think of it, bath is wrong way round to view Bath picture).
Well, also added butterfly emitter, which is leaking in a bit into 2 next door shops, but only with odd wingtip so hopefully is not objectionable. Also butterflies drift onto street but see that rather as a plus in attracting people in. 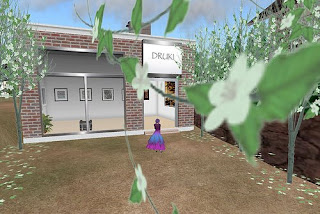 Minor issue was that in order to do stuff in shop have to activate Juicy group tag, Juicy being sim where shop is. Then forgot to change tag, and only realised at end of an educators' coop meeting that still had "Juicy!" written over my head. Not so embarrassing, but a bit, since are other kinds of group which "Juicy" might describe, enough said.

Colleague from Education has also set up own art gallery, v. cool on own plot of ground with nice green/white setting.
Posted by Sheila Yoshikawa at 20:46