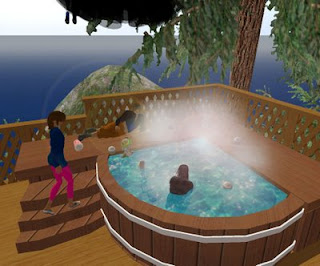 Have omitted to blog about induction session for people in School of Education at my RL university. Was heartening to see new people on the island and more tangibly Education will be funding half of next year's rent on the island, should LL see fit to bill us for it.

Gave tour of island including dropping people off at mountaintop hot tub. Scarcely anyone has used this so was nice to see it occupied. Down side was that realised had become too emotionally attached to various bits and pieces on island, since am used to treating it like my own land. Am also used to the "wow, awesome" reaction that have mocked in past but now realise have become accustomed to. Realised also that this was FIRST event on island where had not actually been lead person. 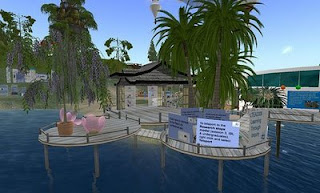 Thus was in need of short meditation break with Mitsy in my office after induction, but ended up feeling better. Old CILASS building is now Education's, but stripped down to wooden ground floor. Have created new tiki-type space for CILASS (see pic) which hope they like (as yet is worrying lack of feedback).

Other deletion/creation was of the houses on my personal land. Felt was time for change and have replaced one of the classic Asian buildings with more contemporary Japanese home that mostly consists of a bathroom and a patio. 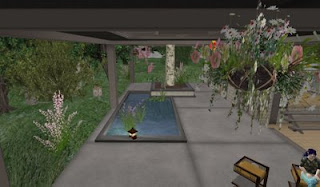 Here you see the patio and in particular rather lovely hanging basket which have just acquired at no little expense.
Posted by Sheila Yoshikawa at 20:16

Hot tub? Guiding some people around SL (UK FE people) soon - is it okay if we use the tub on our tour? That'll certainly be something different.

Yes, certainly!I can drop you a landmark - or you can find it on the hill behind the lbrary. There's also the student common room on the other side of the hill (with pool and shower) and a dance ball on teh roof.