As part of SLEDcc conference there was a library tour. Assembled on ISTE and could take a library hoodie and a notecard with LMs of places to visit. Also encouraged to join ISTE Tours group so that could get group IMs with info on where to go next etc. Good idea except that various Group functions weren't working so in end although managed to join group, still the organiser Corinne (who worked v. hard BTW) had to go round saying "meet in library XX in 10 mins" and so forth (here she is in 2nd pic, while I'm upstairs in McGill's library). 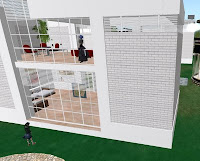 In terms of libraries main thing that came out for me was that I need to do library tours more often. Although there were libraries where ... there wasn't much to be frank, although some of them looked quite cool, are certainly a lot more then when I last toured round and some of them with more stuff, new layouts etc. etc.
Ended up (after various exploits inc. crashing out, reentering as vapour cloud, losing tour etc etc) in Stanford Uni library, which was basically a giant hall of links to library catalogues and so forth (hmmm).

Our tour leader tried to tp to next place and inexplicably landed in strange subterranean area under library. We all joined her, and when we found a hidey hold with a fire and crates, Georgette produced some marshmallows and we had a pleasant social interlude until it was time for the official social interlude at the end of the day.

Decided that would be nice to have a similar bolt hole on Infolit and did TRY to create one, but turned into idyllic rather than grunge - seem to be drawn inescapably to waterfalls, mossy ferns etc. Will have to give self talking to and try again.

In fact in terms af getting steep walls have worked out what need to do landscape-wise ie need to start with flat land and raise spikes of land around it (rather than trying to burrow into side of existing hill as did here.
Posted by Sheila Yoshikawa at 04:29