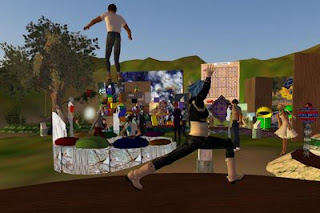 Events attended: 1 (good); New Friend made on Infolit iSchool: 1 (good); Total no. of new Friends made: 3 (good)
Am starting to take up my SL again, and today attended first Event, namely the SL Researchers meeting. This was billed as discussion, but turned out to be visit to Zatorah Shepherd's Multiple Intelligences creation on Koru (43, 219, 22). Had organised a visit to that, as part of Infolit discussion series, but was happy to go there again, as is v. interesting build & good to explore with others. Saw Bluewave , was offered friendship by a couple of people and spent considerable time doing yoga animations. Must take the Educational Informatics students there. 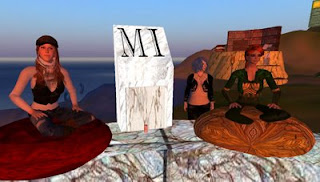 Afterwards tp-ed back to Infolit iSchool, and when saw someone else on island could not resist flying over and saying hi (see last picture). Was librarian from USA who had heard about Infolit at the ALA midwinter meeting in SL. Just as well I didn't know about THAT conference, since although want to resume SL professional life cannot afford to revert to former existence of doing Day Job and then spending hours and hours in SL attending meetings and buying clothes.
When say "afford" there is a literal aspect to this, since now have online connection at home (so avoiding staying v.v. late at office) using 3G mobile stick - but, gosh, SL certainly soaks up the megabytes, can see the pounds and pence ticking away. Still, all worth it when can view sparkly trees, multiple intelligences and super-real wave effects from the comfort of one's own armchair. 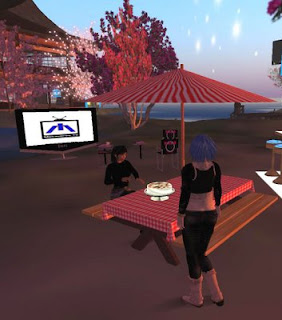 Actually, it isn't an armchair, but a rather rickety folding chair with a thin cushion on it, but am sure you see what I mean.
Posted by Sheila Yoshikawa at 17:49 No comments:

Back to work, hurrah (or not) 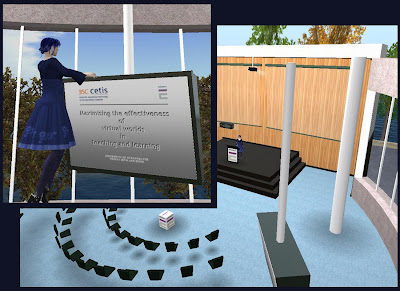 Talks given about SL: 1 (good); Weeks since operation in RL: 8 and a bit (good); Hours spent using SL with a mobile 3G stick: several, but not whilst attending Eduserv/CETIS conference in case it sucked all the 3G goodness out of Andy Powell's stick

Is in fact now just over week since gave talk at Eduserv/CETIS event on Maximising the effectiveness of virtual worlds in teaching and learning. This was held at Strathclyde University in Glasgow and was first time had been more than 2 miles away from home in London for 7 weeks, so was Big Adventure. Felt knackered the next day, but was glad had gone as good event with lots of people there. Powerpoints and (when possible) audio was streamed into Eduserv conference centre in SL. In pics above you see me there after the event. To see what it looked like at the time, see http://www.flickr.com/search/?q=cevw09

In SL had dressed in fetching blue garb for conference, but
a) failed dismally in changing Internet Options so as to pick up the Strathclyde University wifi signal on my laptop;
b) even if had succeeded, was instructed that using SL via this wifi was forbidden;
c) noticed that Eduserv whiz Andy was using a 3G mobile stick to stream stuff into the SL Eduserv, and did not wish to disrupt this, so refrained from using my own 3G device. Noted in passing that his stick is bigger than my stick, so perhaps his would have won anyway in competition to suck up all the 3G signal (can see that my understanding of how mobile phones work is at sub-bluffer level).

Am now in Sheffield, bit of a shock as instead of e.g. partaking of exquisite lunch prepared by better half and then settling down for quiet doze whilst listening to Radio 4 or watching the 2.30 from Lingfield*, I am now having to revise module outlines, chair Teaching Committee, mark dissertations and circulate guidance on wordcounts for individual and group work for both 15 and 20 credit modules in line with university recommendations as stated on the E1 form. Yay.

Anyway, scarcely need to say much about the Eduserv/CETIS event as all you might need to know is on the wiki at http://wiki.cetis.ac.uk/CETIS-Eduserv-VW2009 , including my own powerpoint and voicecast that have not yet dared to play. At least with an audio file you can't see me waving my hands around as if fending off attack from demented bats. However, having said that, I did take some notes, so will recount these in subsequent entry.

Got own talk over with unexpectedly early, since Silversprite, due to speak first, was taken with a RL nosebleed that did not stop. He arrived at lunchtime so were able to swap medical stories. Discovered that I was nervous about speaking, so actually relief to get it over with. Met a couple of people that had previously only met in SL, e.g. Fire Centaur, and also a North American colleague who had not seen for years and who is spending a sabbatical investigating virtual worlds which sounds fun. Will leave any description of actual content of presentations to next posting. May blog a few non-work items in between.

* Lingfield is a RL all-weather racecourse, BTW, where racehorses of generally moderate ability compete for risibly low prize money.
Posted by Sheila Yoshikawa at 19:06 No comments: 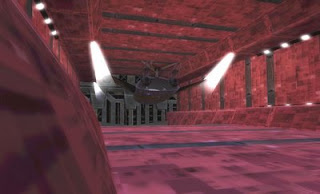 Moves to new B5 quarters: 1 (troublesome); Hours spent in SL in last week: 1 (bad)
Still not fully well in RL so am still limiting sorties into SL to short reacreational ones. Had to devote some time to Babylon5 matters, since B5 have moved sim for 3rd time - think latest move is because last B5 was in an open sim that used to be v good value and now isn't. Pic shows me approaching docking bay on way to new quarters. Haven't had time to explore new sim yet. Moves of SL B5 in time/space almost equal to those of Babylon 4 (see various episodes of B5).
B5 is sharing new sim with Wheel of Time role players, based on the the late Robert Jordan's Wheel of Time series. Must confess I have read all books published. Therefore paid brief visit to this part of sim, but so brief that didn't take any pics. Seemed to be replica of the White Tower and possibly the camp across from it as in the last WoT book. Not sure why I have kept reading the 000s of pages of WoT as can be criticised from many perspectives, but there you are, must be true nerd at heart.
Posted by Sheila Yoshikawa at 12:07 1 comment: