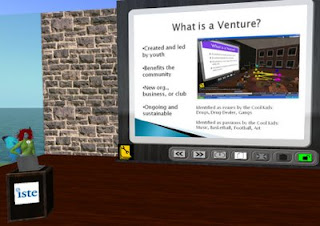 Unfinished blog posts: 3 (bad)
Still have to catch up with posts from SLEDcc conference. Took various notes at time, but now seem too detailed or not detailed enough. Have decided to cut losses and try to cram remaining thoughts into two posts.
Think that all this is from the second day [have checked now, yes it is], but has already become something of a blur, not helped by a RL cold. Upside of cold from point of view of this blog is that finishing blog posts seems less demanding than finishing ppt for talk on Web 2.0 tomorrrow and various work chores, and can use cold as excuse.
Bluewings Hayek talked about Access for All: Working Online with Incarcerated Youth. She started working at the detention centre with a book club, and things developed from there, bringing in more technology for work with the teens related to the public library. They tried blogging and had a digital camera, which detainees used e.g. to film a puppet show for their children. 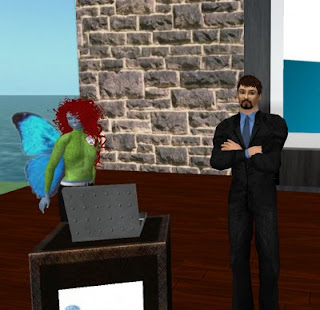 From there it stepped to Teen Second Life. There are weekly workshops and there is a venture plan initiative, funded by by the Robert Wood Johnson Foundation. The current venture is about "keeping younger kids in their neighborhood off the streets; basically, as they have put it, they don't want younger kids to end up like them." They have to develop the idea, pitch it and get seedcorn money, which they can tap into to work on the project while they are still in detention. They blog on the Global Kids website http://www.holymeatballs.org/ ("DIDI initiative") and they've also done a podcast.

Challenges include the fact that the population is transient, and they can't go online at will as they have to be monitored by someone while they're online. However being able to go online at all is fortunate - in RL I met someone who was working with detained teens in the US and even she couldn't use the internet there. Bluewings' email is kczarnecki@plcmc.org
Posted by Sheila Yoshikawa at 08:02