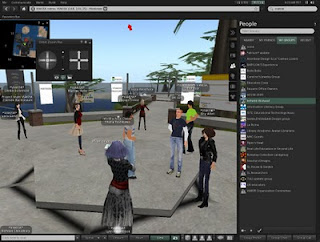 Sessions in viewer 2: 2 (bad); Training sessions attended in Czech: 1 (foreign yet familiar)
Today was giving talk about SL in Prague. Created short video as well as presentation, so will link those at the end. During talk had to to stop every few sentences to let interpreter translate into Czech, which worked surprisingly well as interpreter was v. good. She also later whispered English translation of Czech talks into my ear.
However, by time of SL workshop (given in afternoon by Zdenek, who have mentioned before in this blog) she had gone. This was not v. important as I was merely set decoration, with Zdenek doing hard work inducting Czech newbies into SL in Czech.
Was one element in which I was newbie also since have not yet Bitten the Viewer 2 Bullet but have been skulking along in comfortable old Viewer 1. This has not mattered since haven't done any how-to-use-SL sessions over summer. Now new academic year is upon me, though, will have to come up to speed v. rapidly, since think should use it with first years. To be more precise, will have to start teaching using Viewer 2 in 9 days time.
As can see from screenshot above, Viewer 2 was what was installed in lab, so took opportunity to find out where things were (in which partially suceeded). In fact was not very first time had experienced V2: went into it by mistake on someone else's machine last week, then took fright (Where had new IMs gone! Where was the map! Why was inventory taking 10 minutes to load! Why is the chat box so small! etc etc). This time had been in a good 5 mins before realised that clothes was wearing were not clothes was wearing when logged out yesterday, but clothes had been wearing when last used Viewer 2. Remembered others discussing this glitch, and know this means must plump wholeheartedly for this viewer 2 thing.
Anyway, ppt, Using Second Life as a learning environment, is here on Slideshare: and this is the video, made with Screenr and then Animoto. Have also put it on Youtube, but it isn't (for reasons am too lazy to fathom) as high res on Youtube, so this is the Animoto version.

Posted by Sheila Yoshikawa at 12:25 No comments:

403 Forbidden: The server understood the request, but is refusing to fulfill it 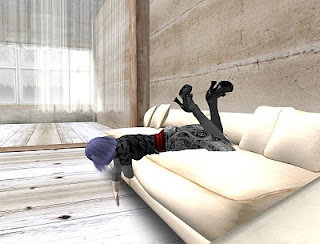 Just tried to log into my sheilayoshikawa Twitter account and received the above message. Was not logging in for any serious purpose, so am instead assailed by sudden nostalgia for days when there were REAL error messages, ones which gave you no clue whatsover about what was wrong. Still do get those sometimes, but tend to be associated with V. Serious Meltdowns involving blue screen of death and stange series of numbers rushing over screen, which is not a situation where you can have a good old nostalgic wallow.
Sometimes they would be a bit like the one above, implying that it wasn't just some strange random error, it was a personal piece of malice directed at YOU. "The server understood the request, but is refusing to fulfill it": that's an error message with attitude.
The most famous web error message was the "File 404 not found" one, which you got if the page you wanted no longer existed and the webmaster hadn't been bothered to do a redirect or explanation. You still get it now and then but there was a time when you would be more or less guaranteed to get it once a day, and there were some wonderful spoof websites and collections of amusing/dreadful 404 pages.
After half hearted googling have managed to retrieve a page which I think is one of the more amusing spoofs - except it is in what Google Translate thinks is Estonian http://puhkused.com/ Is that right?
[several hours later] Have managed to find ye olde Geek Haiku - ah, this was my favourite:

A File That Big?

A file that big?
It might be very useful.
But now it is gone.

Posted by Sheila Yoshikawa at 05:22 No comments: