I celebrate my Rez day with the cats 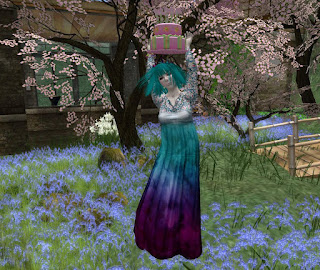 Another year another Rez Day and here I am celebrating my 5th, with the same old animated birthday cake over my head. Earlier in the day had been marginally more social.
Had been asked by Kali to transcribe at the VWER meeting, and so had hour rattling away at keyboard. Up side is that had to stay awake and pay attention, down side is that by end fingers felt partially detached from hands through overuse.

Took along newest kitty acquisition, vis, Tassie. She is seal point siamese, and is named after The Silver Tassie, as in Burns' poem. In fact almost called her Tassel*, but thought that sounded too much like I was considering using her tail for a bell-pull. Since she is still only a few days old, she sits on my shoulder rather than being held, which is very much in the cute-or-what-category. Can see in the 2nd pic what Tassie looked like when newly rezzed i.e. small lump of clay. 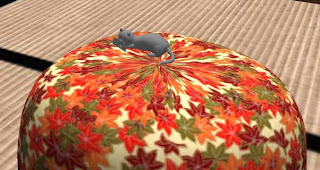 Returning to subject of Rez Day, had thought about attaching sign to head with something amusing e.g. Rez Day Girl! However a mere nanosecond of reflection revealed that this would not be amusing at all, so didn't. Did receive one IM from someone wishing happy rez day, so am grateful for small mercies. Outside SL have reached stage where get v. few actual birthday cards. Thank goodness for Facebook, as got lots of Happy Birthdays on there, where would one be without social networking. 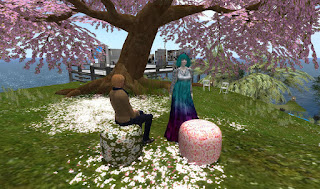 * I know that Tassie isn't short for Tassel, but they sound jolly similar.
Posted by Sheila Yoshikawa at 21:10 No comments: