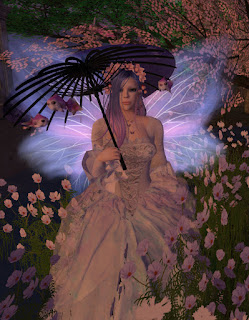 Today is 12th rezday. So far no-one has said Happy Rezday, which is bit sad, on other hand nowadays on physical world birthday only get handful of cards and have to rely for bulk of greetings on Facebook from people saying Happy Birthday because their mobile device has told them to.

Here is birthday portrait. Unlike UK royal family where trend is to take pic of royal child in ordinary clothes doing dull everyday things, have gone for Fairy Godmother in cherry blossom forest look. Why look ordinary when can be a fairy godmother?  In fact look came together when (a) decided to wear wings, since theme of last night's VWER discussion was "fantasy in education" (b) saw Beth arrived dressed as fairy and so googled "fairy" in inventory and came up with this dress which actually may have not worn since bought it in Feb/March 2018 (but wait - it was out of its box - must have at least tried it on). (c) Today snapped up umbrella with attached goldfish which was Fly By Friday offer. Et voila, I shall go to the ball.

Only downside to day has been splurging 500 Linden on a gacha item (Serenity Style- Vintage Box Car - GARDENER ULTRARARE) on Marketplace yesterday and finding today that all that was in the delivered box was a texture of the gacha key. However, this has only happened twice ever. Is surprising it doesn't happen more often, really. Should have been alerted by fact that (1) was no picture given on the posting (2) were only 2 items from gachas on sale from that vendor. You see I CHECKED but did not REFLECT. However will LEARN from this mistake. Or perhaps not. 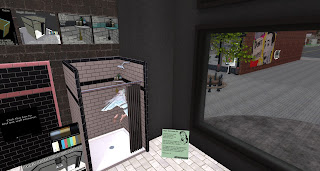 Earlier whilst checking out Fifty Linden Friday items got stuck in a wall (see pic, inside the shower). How nostalgic that feels, haven't got stuck in a wall since last year at least, it used to happen all the time in younger days. Suppose that is what being SL 12 means, feeling nostalgia for times when you felt embarrassed and didn't know how to escape. At https://adventuresofyoshikawa.blogspot.com/2009/06/reflecting-on-glitches.html. reflect on transformational skills ie point where realised how could stop being trapped in walls, under tables etc. Traditional rez day pastime appears to be hauling out pics of self on previous rez days and noting how much better one looks now without those flexi skirts/ system bodies/ ugly feet/ mad hair. Still have system body, but can certainly have smug reflection on how much better hair, feet and dresses look. On other hand: me at age 1 (see pic and https://adventuresofyoshikawa.blogspot.com/2008/05/happy-rez-day-to-me.html) - cute or what? Certainly fare better than comparing physical world me now and 11 years ago.

Will now go and get physical world lunch and try not to get stuck in a wall.

Posted by Sheila Yoshikawa at 06:47 No comments: