Pieces of Mitsy still floating in Eduserv Ocean: many (spooky)

Realised that profile hadn't been updated in ages (much like this blog) and found that some info was out of date etc. etc. so needed to check pick landmarks. One pick is Eduserv Island and was surprised to find it still there since not sure Eduserv even funded any more. Even more surprised to come across pieces of cloned Mitsy still floating beside the old CILR office. Still some bits which move around and mew. No less spooky than it was six years ago. 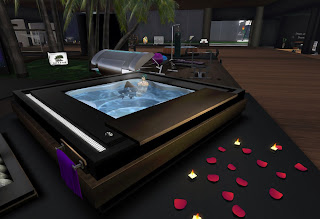 Blogs disappearing beyond recall: about 20 (v. bad)
Sudden panic has driven me back to Yoshikawa blogland. Have class where force students to create team blogs, and yesterday found that team blogs from 2011 had suddenly gone phut, they were ex-blogs. Blogger sounded v. calm when told me each time that there was no such blog, but was v. upsetting. Think it is because students created them using uni email accounts which since expired, so are not active bloggers. However, idea of Adventures going phut too awful for words. Decided needed to Keep Blog Active.

So, surprisingly, here are a few random thoughts of the day.
1) Hot tubs, changing yet changeless. Hot tubs were amongst early purchases in 2007, in fact venerable examples still inhabit inventory as throw v. little away. This hot tub is in some ways an advance (it has curves, water goes in and out, there are 6 poses in each corner, it is not very many prims). On the other hand, it still looks pretty much like a hot tub circa 2007 in essential i.e. has wooden bit on outside, watery bit on inside, a few folderolls like candles and think those are meant to be rose petals although they look more like mishapen saucers, you sit in it, end of story. 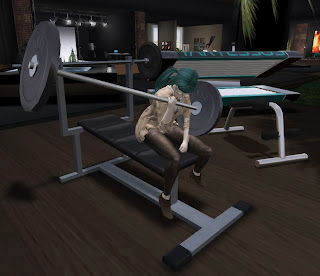 2) On the other hand, seems to have been great advances in gym equipment. Look, am evidently strongest avatar in universe since can lift heavy weights with one arm. This was in a shop the name of which escapes me (no change there, then) where I ended up carrying off a punch bag and some bongos. And possibly something else. Did I buy that fireguard? Think not. Was one of those shops with lots of things at 300 Linden plus, so when you come across something cute at 90 Linden you immediately snap it up. Punch bag has v. amusing set of animations and bongos have both sound and silent options whilst you play them, so can practice without annoying neighbours. Since bought them and then forgot had bought them do not yet have pics. 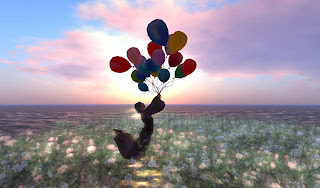 3)World's End Gardens continues photogenic. Saw in someone's blog that WEG is about to go phut, too. So thought should visit it a last time. Bought a clump of blue roses and did a lot of posing with some balloon animations that discovered in inventory. Arty or what.

4) Eyes and cats are go.
Kittycats are still darlings of my SL, and the animations just get cuter and cuter (hold! follow! make random inane remarks!). However sometimes the kitties go a bit odd, with part of the body sitting up (for example) whilst the rest of the kittycat body stays put. Had particularly disconcerting moment when Marl's eyes stayed where they were whilst rest of head was lowered. This brings together two of my most popular tags i.e. eyes and cats. 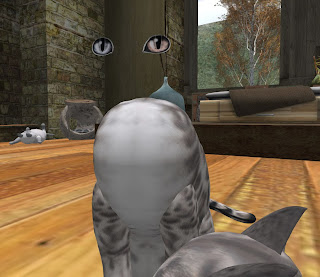 Think this is possibly Art. Question is: who created it, me or the kittycat? Still, since Linden Lab now owns everything created by anybody in SL, is rather meaningless to ponder on this.

Posted by Sheila Yoshikawa at 21:25 No comments: 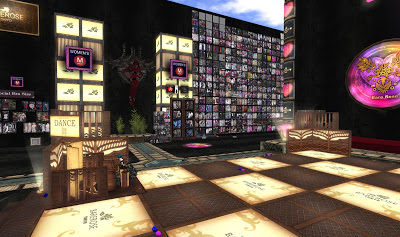 Spent last night stalking raffle globe in Barerose. Reminescent of old times so decided ought to unleash new blog post. Am surprised to see after all these months that still have 31 followers (though have my doubts about the follower named ZaLV0fYV2Z7OF_LohUC0.m.j7rqKUg). Suppose they have forgotten were following and will be surprised and no doubt delighted to see new Yoshikawa post popping up on their dashboard.

Must have got bout of nostalgia for Old Blogging Times after seeing Barerose refreshingly unchanged i.e. still consists of huge structure like tacky gothic cathedral with walls filled with piles and piles of stuff in no particular order (see pics 1 and 2). Most stuff priced at something like 179 Linden which sounds cheaper than it actually is, so immediately tempted to snap things up esp. if e.g. box of cute floral chiffon tops which is nestling in a bank of costumes for obscure old anime series. Think Barerosers must really be fiendishly sharp businesspeople. 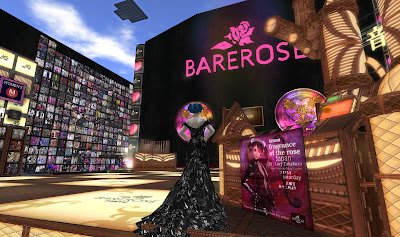 The Raffle Orb detects who is in its orbit and periodically shouts e.g. "ChocolateMunchie Resident has just won a ::: B@R ::: Gold Long Dress just for being here!" Probability is that wouldn't want most of items anyway, but is worth it to find out what some of the things are e.g. what on earth is an "Abs. Dress  C1", apart from being a dress, obviously.

My loot so far for hanging round in the Barerose orb zone (I am in evening dress in foreground of pic 2) is:
- Two mesh heads, one Furry, one not
- Knee length striped dress
- Display katana x 2
- Fancy white fantasy armour with wings
- Spooky Bat avatar
You can see them in their boxes here. Unfortunately none of these were item that caused raffle-stalking in the first place i.e snake neck wrap.Wanted it as in RL was born in Year of the Snake which is also THIS year, so from this you can guess that am at or nearly one of following ages: 12, 24, 36, 48, 60, 72, 84, 96. Will give clue that isn't 12 or 96. 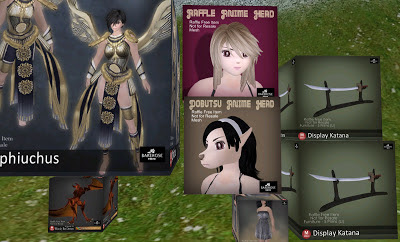 Anyway to return to loot, have to admit that anticipation was rather more than the actuality. Indeed to be frank; - are those heads Sheila Yoshikawa style? Think not. How often have you seen me in a demon avatar? Never. And what home requires 2 identical display kitana? Well, actually, could see those nestling in twin niches in some swanky Japanese mansion.

That trip to Barerose reveals top 3 trends in SL fashion consumerism, as evidenced by type of stuff on sale. These trends are:
- Mesh. Most designers now putting things out in mesh, despite fact that means that a) you can’t layer properly and b) you have to have a shape either very thin and straight or VERY curvy with unfeasibly small waist aka Standard Sizes (Xtra Small to Large).
- Petites. Apparently lots more people want to go round as tiny people, and now they have lots of clothes to do it in.
- Add-on breasts aka Lolas aka Tangos aka Lush (etc etc). SL now populated by far more avatars with huge fronts, which bounce in an oddly realistic and disturbing fashion. Or perhaps disturbance not that odd. Anyway lots of designers now issuing clothes with quaintly named Appliers which mean that their clothes adapt to these appendages. Started by being just designers of a more Saucy nature, but has definitely gone mainstream. Thus some of Barerose boxes depict t-shirts and fantasy battle armour of eye-popping proportions.
If this all sounds v. unpleasant is simple solution i.e. to use SL browser that can't see mesh. This reduces Lola-wearing mesh petites to a disembodied name-tag and perhaps the odd non-mesh fairy wand.

Posted by Sheila Yoshikawa at 18:45 No comments: