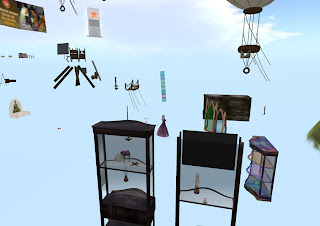 Roses given: 2 (good); Lilies bought: 5 (good)
In RL am currently in Milan, Italy, where atmosphere is somewhat like soup (i.e. hot and damp) and the wifi is v. expensive. However, must feed web addiction, so am feverishly blogging RL conference at 2am.
As break from this have been popping into SL to nab the odd freebie and reflect on how have enormous backlog of events to blog here. On Thursday evening was another discussion session, however instead will mention chance encounter from - hmm about a week ago.
Was zooming round getting some choice morsels from Stepping Stones hunt when encountered Aquamina Esoteric Vibes. First pic shows what one of Aquamina's shops looks like whilst things are rezzing, since mall (on Carmina) is in the sky. That is me in the middle. Items are sort of new age/ psychadelic/ Eastern / cute. 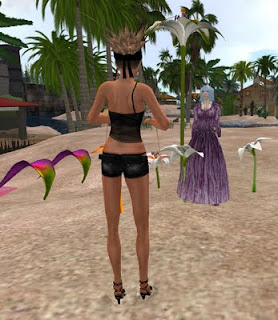 At any rate had number of temptations, and browsed this shop, buying:
- Candelabra in form of 3 calla lilies
- Bowl of strawberries that transforms on click to table in form of giant lily
- Something else that I can't now remember, hey, it was a week ago, it is probably a bit worrying that I can remember the other stuff in such detail.
Then found landmark to another of her shops, where I bought:
- amusing tall lily: when you sit on it, you dangle down (it is called the "hanging out" lily seat). This is in the 2nd pic.
- 2 assorted oil lamps
At this point Aquamina Khalifa (her back to us in 2nd pic) appeared. We had a nice chat and she gave me both a colour-change hair rose and a rose to hold. Her stuff is modestly priced so was touched by her generosity. Then (showing that kindness pays) I tped to a THIRD shop and bought a jug and bowl (you click it and the jug pours water into the bowl).
After this staggered back to office and placed Calla Lily candelabra on the Curio cabinet that I have. You see it on the top right shelf. 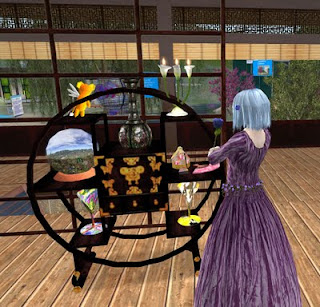 Think the lily table can go in tree hhouse. Current table on bottom level is v. appropriate (sort of moss covered), but also 80 prims, which is somewhat excessive. Am trying not to put anything more onto island without taking something off to compensate. Do not always succeed in this. For example, all that was removed to place the candelabra was a Morrocan tea light holder which was 2 prims at most.
After this had interesting IM conversation with North, who has now moved to Rutgers in RL. Am tending to miss Educators Coop meetings currently, since am usually on the move or at least away when the regular 6pm (my time) meetings are.
Finally tried out some different windlight settings, to take portrait with the hair/hand rose gifts. The settings are supposed to make you look really really beautiful, but must say they only seem to make me look like a luminous corpse, beckoning luckless wanderers to their doom. 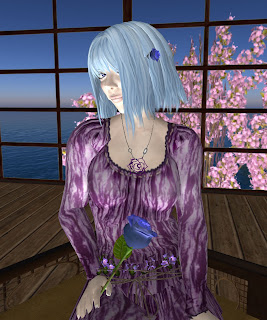 Perhaps they only really work on people with tanned skin. You can see the roses, though.

BTW Aquamina Khalifa's mottto on her profile is "Fate has brought you to Second Life enjoy it".

I like that.
Posted by Sheila Yoshikawa at 17:23 No comments: 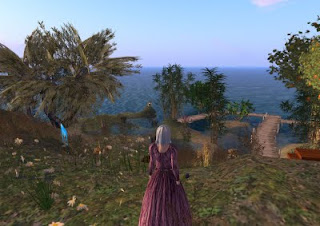 When: Thursday 20 Aug 12 noon SL time
Where: Infolit iSchool, in SL, the virtual world
http://slurl.com/secondlife/Infolit%20iSchool/126/243/21/
EDINA (http://www.edina.ac.uk/ ) is a public-funded UK data centre, whose mission is to "enhance the productivity of research, learning and teaching" in UK colleges, universities and research institutes, with online services and learning materials. Nikla Tokyoska (Nicola Osborne, Social Media Officer) and Edina Taurog (Andrew Bevan, User Support Deputy Team Manager) will briefly introduce EDINA and then want to chat about ideas around how they, as academic service providers, could use SL (and perhaps other virtual worlds) to support or extend EDINA's services.
This is part of the University of Sheffield Centre for Information Literacy Research SL discussion series.
Posted by Sheila Yoshikawa at 08:46 No comments: 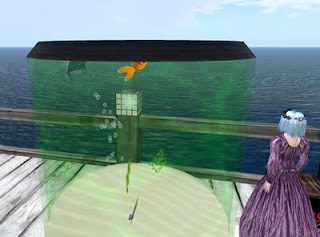 No. of dead fish: 2 (v. bad); No. of fishtanks cleaned: 1 (too late); Pinches of fishfood put in tank: 1 (too late)
Every obsession has its casualties and innocent victims of the Slice of Summer hunt were blue and gold 7 Seas fish that had I copied into tank and then heartlessly neglected whilst pursuing watermelons.
Happened to wander into Jason Farradane centre when hunt was over and saw fish bobbing sadly at the top of the tank. Here they are. Tried Cleaning Tank and Feeding Fish, but they stayed there, inert, so had no choice but to Remove Fish.
Must be said that is not total tragedy, since original fish are still in inventory, so just needed to wear them and transfer them in again.
But anyway, what is this stuff about virtual creatures needing feeding? Surely main points of having virtual pets is:
- They do not need feeding
- They do not need exercising
- They do not need cleaning out
- They are perfectly toilet trained (i.e. they never need one)
- You can keep them in unsuitable places with no food and exercise and noone will call Pet Resue or prosecute you.
Yet see that there are, for example, virtual chickens that pine and die if not given suitable food and housing. In fact they die anyway in the end, so frankly pointless in investing Linden in them since is possible to buy walking clucking virtual chicks that will keep clucking and walking even if fouly mistreated (pun) (sorry).
However, now find that am already wondering if should go inworld and feed the wretched fish. Will all end in tears, I am sure. The fishes', if not mine.
Posted by Sheila Yoshikawa at 09:43 No comments:

No. of Slice of Summer watermelons collected: 113 (either v. good or v. bad); No. NOT collected: 3 (frustrating)
One of the reasons why have not been blogging so much is that have been chasing after watermelons on the Slice of Summer hunt, as mentioned in earlier post. Managed to get all but 3. Got stuck at Swim and after camming and flying round for what seemed like hours gave up and started again at a point a few melons on. Later on had broad enough hint that could have got it, but frankly not really interested in Swim prize so didn't bother, as had manged to snag the melon in the next location already so didn't need landmark.
Was stuck for ages at Little Britain, a VERY depressing place to get stuck and was rather mortified when realised that main problem was that hadn't realised there was a 2nd building, which is where melon was. Most annoying stuckness was at Sugar, which is pleasant place to linger, but didn't manage to crack puzzle by end of hunt and so that this prize, plus one after, form the 2nd and 3rd omissions.
Favourite prize was a watermelon rocket and this post is dedicated to showing its many glories. You get in, set the height at which you want the space station to rez ... and the pictures tell the rest of the story.

Posted by Sheila Yoshikawa at 14:13 2 comments: