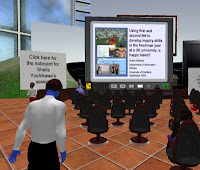 Presentations delivered: 1 (good); No. of attendees: Over 30 I think at one point (good)

Had left readers on cliffhanger, or rather me dangling in uncertainty as to where, if anywhere, was going to deliver presentation. If you remember, original venue had disappeared into v-space together with the island upon which it stood. When logged back after calming break found that
a) Fortunately no longer just appeared as whispy cloud and
b) Was message saying that talk would be in Rockcliffe X auditorium.
Went along to auditorium & set stuff up. Some people were in there testing out a media clip which provided some distraction. Eventually notice went out about change of venue, and, as noted, was quite good turnout. Some people also hung round for questions at end. Had a couple of compliments about way presented so that was gratifying. Also ppt did not fall over, people could here my Voice and altogether seemed to have snatched alrightness from jaws of defeat, or, as organiser Kittygloom said, I was able to "roll with the punches."

Main trouble with was amount of time hanging round: in the end didn't really to get too much apart from own talk. However, after talk went home to bathe and change and attended most important event i.e. social at the end of the day.
Here is the ppt on Slideshare.

Using first and second life to develop inquiry skills in the freshman year at a UK university: a happy blend?
View SlideShare presentation or Upload your own. (tags: second sl)
Posted by Sheila Yoshikawa at 00:53