I missed my rez day 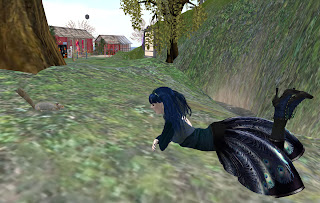 No. of rezdays in SL: 3 (good); No. of rezdays celebrated: 0.5 (sad)
Had been contemplating celebrating my rez day (3rd May) with some sort of party this year. However, turned out that was away from SL that day and realised today that had actually forgotten to celebrate it yesterday when got back in.

Was v. excited about first rez day and contemplated all sorts of celebrations. In the end bought new dress and managed to get Harumi inworld briefly to celebrate (which is the 0.5 celebration mentioned above). As can see from that 3 May 2008 blog post also went to Babylon 5 party. However, do not think actually told anyone in B5 that it WAS my rez day, so not sure that counts.

Note that did blog on 2nd rez day but, as for this year, was day when was expected to do various RL things, namely watching Kentucky Derby and 2000 Guineas (these are horse races) on TV. 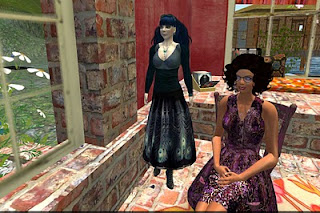 Another problem is that in RL and SL am sort of person who thinks that if DO organise party NO-ONE MIGHT TURN UP. In SL is partly because most friends are from work-type connections, which makes them no less friends, and certainly does not rule out virtual discos and drinking (far from it) but suppose means that am more likely to invite them to an indepth discussion of pedagogy for information literacy than simply hanging out and chilling. (In RL, BTW, friends are scattered round country, so organising anything would require more Effort than can muster)

Anyway, Now I Am Three, and am sure that some kind of philosophical reflection might be called on, however instead have simply given you a pic of me communing with the squirrel under the magic apple tree and some photos of me and Adra. I was doing a bit of wandering round checking things are ok, and realised hadn't spent any quality time with the squirrel for ages. It possibly now shows its age, but is still cute IMHO, bounding around, chirping and still generating its own nuts. 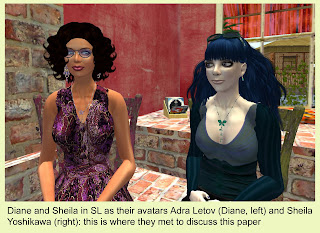 The 2 pics of Adra and me were taken to go with a paper we have written about teaching library and information science in SL. At first we tried her sitting down and me standing up (see middle pic), but it ended up looking like a still from some play about alienation ("A common room. Adra is seated. Sheila is standing. They both stare at the wall. There is the faint noise of typing. Sheila: "I'm still waiting for things to rez". Adra is silent.")

The last pic is the one we are going with, since at least we are looking at each other. And both look very stylish, I feel.
Posted by Sheila Yoshikawa at 12:11