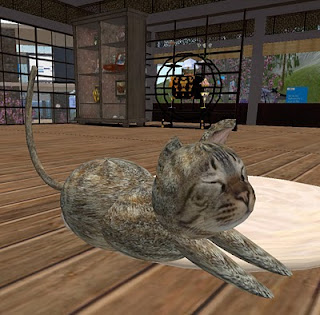 Creatures on Infolit iSchool: quite a few (good); Average age of creatures: 2 years (approx) (bad)
Instead of doing anything vaguely useful, have decided to create a record of creatures on Infolit iSchool. Was prompted by squirrel encounter last week, thinking how the creatures are all getting on a bit and perhaps some of them ought to be sent the way of the really STRANGE deformed rabbit that lived on the hill behind Hobbiton, and which I quietly put out of its misery last autumn. On the other hand, some of them are still cute. Or are they just cute to me? You decide
First up is Mitsy the cat. Mitsy is definitely showing her age, and you only have to search on Mitsy (on this blog) to see that she has a history, mostly a history of getting trapped under buildings and disintegrating in the sea. However - she is named after a RL cat who is no more. In fact she is about the only SL creature I own that HAS a name (apart from some one-prim goldfish that arrived with names). So, Mitsy is likely to stay, even though she is the size of a small pony and regularly roams away to her doom. 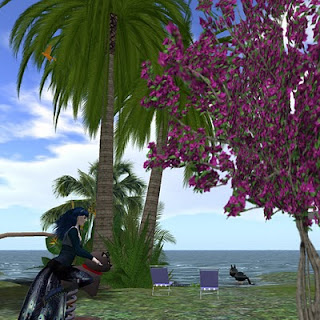 In these next two pictures you see an orange parrot: it roosts, it flies, it screeches. The screeching is actually quite lifelike, and when it swoops around (see small orange blur in top left of 2nd pic) it looks moderately convincing. However, when it roosts, you can see it is just made of prims. Fortunately it spends a lot more time swooping than roosting. I got this bird in some closing down sale, and I have similarly retro crows and seagulls in my inventory from the same source.

Am not sure whether the cat and the dog in the 2nd pic count as creatures, since they each have springs instead of legs. On the other hand, the cat one probably looks as much like a cat as does (for example) Mitsy. Anyway, these are functional creatures since you can sit on them and wobble around to your heart's content. Like the parrot, they are in the Sure Thing cafe on the sea shore.
The parrot seemed appropriate since the Sure Thing is named after a RL cafe of the same name in Queensland, Australia. The RL rainbow lorikeets, that make an apalling racket at dawn and dusk, just over from the RL Sure Thing, sound a bit like the orange parrot, only more so. 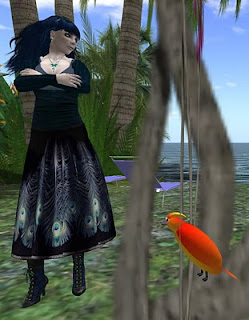 So can sit back in SL and feel nostalgic for Aussie sun and sand with right sound effects.

Am thinking I could make this into a kind of i-spy guide: find all the creatures on Infolit iSchool. Can just see the contemptuous smirk that this would elicit from students. Librarians might enjoy it, though. Which is not an insult to librarians BTW, rather the reverse, I would say. He who is tired of i-spy is tired of life. Or has more interesting things to do. One or the other.
Posted by Sheila Yoshikawa at 16:27