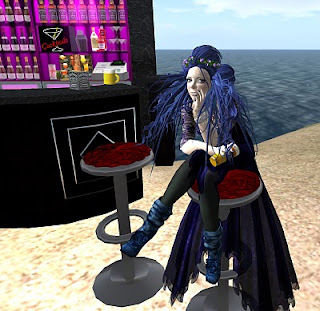 Parties attended: 1 (good); No. of bottles of vodka consumed: 1 (virtual, curiously non-alcoholic); Nights danced away: 1 (good)(but will regret it in the morning)
Tonight attended UK educators' party in which Usual Suspects met pleasantly together on Bluesky's island. Initial impressions were mixed as appeared we were going to spend party sitting round mystitool table, which is not my idea of rollicking abandon. However soon emerged that actual party was at beach bar complete with barstools, louche poses, glitter dance ball and soulful palm trees.
Had dressed up for occasion in what turned out as a sort of Helena Bonham Carter ensemble, lace and freaky hair, and felt that party had enjoyably retro 70s feel, but that is probably because the 70s was when was at uni, and just getting nostalgic flashback.
Bar dispensed bottles of Jack Daniels (always a fave, never tire of that drunken collapse animation you get after 3 sips), beer (my first tipple of the evening) and vodka (bottle or glass, obviously went for the whole bottle). Not that drank vodka in RL, in 70s or now, if going to knock back RL alcohol, it should at least have a proper taste (pref. of fine wine or malt whisky). 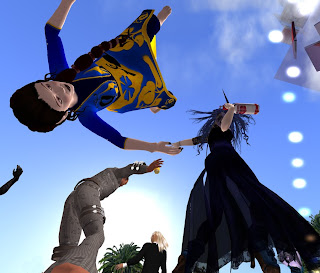 Kattan and Plymouth led way in disco dancing, at some point people started doing fairy dances (where you leap up and twirl round), and the chat seemed v. amusing at the time. Added later During banter, someone made joking remark, which remark I alluded to in earlier version of this post, as if it had not been a joke. If had allowed brain to intervene between self and keyboard would have realised that could not possibly be true. Consequence was offending someone that certainly would not want to offend, and having a general lord-I'm-useless freaking-out moment. Many lessons to be learned here, including 1) think before blogging, especially about friends; 2) don't blog at 1am when v. tired and therefore not firing on all mental cylinders. Just sort of thing I might tell to my students. Oh dear.
Posted by Sheila Yoshikawa at 18:08

Well, if I did not enjoy your blog already, the bit about Malt Whisky would do it for me :-)

My favourite is Laphroaig - it made me consider to learn Gaelic once (but I gave up).

See this photo on Flickr for further words on the subject.

Yes, that's one of my favourites too - I like the peaty Islay malts. I've visited a couple of distilleries, though none on Islay. I lived in Glasgow for a while, and the West coast is magical.