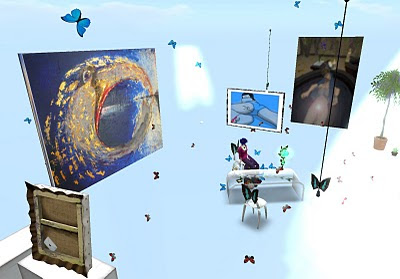 Houses deleted: 1 (slow process); Houses rezzed: 1 (v. good); Houses disappearing: 1 (odd)
After the Infolit session on Thursday when Brielle did her excellent presentation, decided to have some r&r in SL after hard day in both worlds by finally setting up new home from "Y's" on my land. Had already decided to demolish the Ingrid Ingersoll Town House, which still like, but didn't really spend much time there and bedroom was frankly bit of a mess.
Took longer to demolish than had anticipated, since must at some point have UNLINKED everything and so had to delete prim by prim, v. tedious. Had originally intended to set up new house in roughly same place i.e. overlooking beach, but is SO laggy at ground level in the end made the new house a skybox.
Spent happy time filling it with some stuff from old house and some stuff had been saving up.
Key items for display were various objects with butterflies, and artwork. To start with put these in central courtyard, but in the end have created one room with butterflies/art and put bed in courtyard. Remaining room is kitchen/living/music room and has ended up rather cosy. 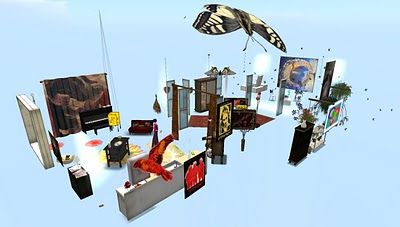 Will delight readers with some proper pics, but in meantime these ones show rather curious effect when last went in (to install a few cute items that had just bought in Kloka, namely teapot, box of tissues, tea set and comfy chair) and found that everything was there ---- except the actual house. Am sure house in fact IS there, since do not fall through space, and meet resistance if try to go through places-where-walls-were.
So did not panic, but took opportunity to take interesting pics of inside of house. Think I like it almost as much without walls, as with.
Posted by Sheila Yoshikawa at 17:36