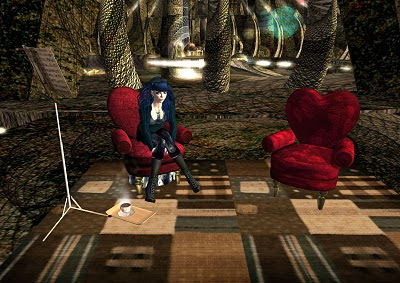 Alien space ships bought: 1 (amazing! awesome!)
Stumbled across my rez-day-present-to-me on recreational outing after the Infolit iSchool meeting today. Is Alien space craft which immediately fell in love with. Is enormous, and has inbuilt sounds and swirly coloured lights. You can also get bits of the floor to move, and it is all very organic. In fact I think it qualifies as Art.

Is also over 400 prims, and although intend to put it on my own land, need to clear out - well about 400 prims - to make room for it. So at the moment is rezzed above Infolit, which means might need to start removing trinkets from my office and cutting down on the number of bedding plants.

Because it's already so ornate, you don't really want to put too much in it. And, e.g., is not exactly the location for the shabby-chic stuff had been collecting recently. So have brought out some disquieting nursery-type items (oversized rabbit chairs, giant bluebirds etc), a few spooky items (though frankly is pretty spooky already) and the red plush afternoon tea ensemble (with a Goldberg Variation on the music stand) which has a view directly out into Space. It's made by Alex Bader BTW 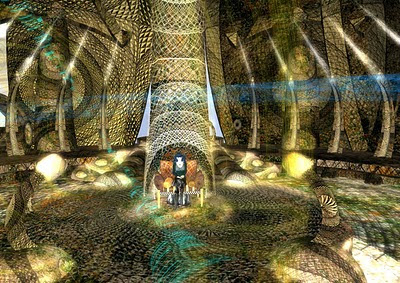 Am not sure am going to be doing any teaching here, but would making spiffing party venue (with dance ball over floor that retracts to dump you straight into the air, when you touch an Alien pod, hehe), or possibly could hold conference about angst and identity in it. Will be ready for it with depressing results currently coming in for the general election. Can just retreat to the mother ship and wave goodbye to my pension.
Anyway whilst the ship is anchored over Infolit, it is here http://slurl.com/secondlife/Infolit%20iSchool/169/114/1999/
Posted by Sheila Yoshikawa at 21:29