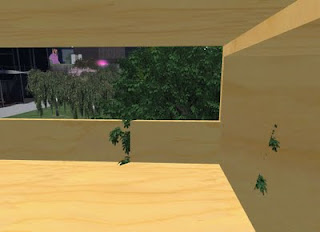 Noticed recently that another new neighbour had started to erected yet another dull plywood house and on inspection saw that, as usual, my trees are poking through its wall. Here you see them encroaching, with view of edge of my property and next door's building on the left.

Decided that should forestall requests and move the trees away. Required a good deal of tweaking since there is a bank at the edge of the property and needed to be jiggled right and down. However, the building on my side there is a Ruined Palace so doesn't matter too much if a few twigs poke through the walls. 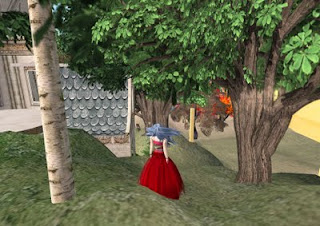 Ruined Palace wasn't bought as such and indeed was not intending to install it Ruined, but due to inexpert handling it ended up borked. Having seen effect, decided it was actually rather pleasing and Ruined it a bit more. Then added romantic foliage etc. as featured in various previous blog posts. It forms part of Bosky Glade which at different seasons has bluebells, snowdrops, giant pumpkins and so forth.

The top of the palace is unborked and have a couch on it, for decorous reclining and posing. As can be seen in 3rd pic, the spreading chestnuts still successfully block out the plywood monstrosity. 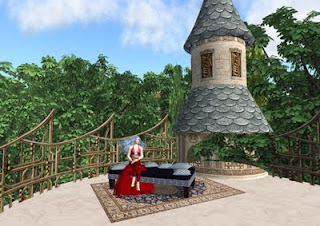 Are other undesirable developments in area. Fourth pic shows giant wall that someone a few plots away has erected. Not sure if is connected with some kind of night club situated nearby.

So here I am moaning about neighbours again. However, have decided that probably enjoy this. Is part of rich tapestry of being on SL mainland that neighbors come, build featureless, hideous or intriguing constructions, and then depart. Gives something to check as soon as get home, adding excitement to a dull day. Have also had a couple of very nice neighbours, and ones who WEREN'T nice have gone away quickly. 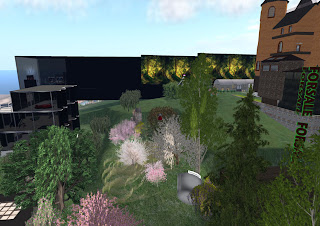 At present, people who want to depart are taking a while, it being a buyer's market. Can see the "for sale" sign on the right of the fourth picture. This has now disappeared since the owner has Abandoned part of the land, presumably to save on tier payments.

Suddenly occurs to me that have never exchanged a word with the only person who has been there as long as me, the owner of the smoked glass house on the left. She used to own a very large chunk of land, but has sold some of it off. Her profile is quite melancholy and hints at a sad love story. Perhaps I should invite her round for tea.
Posted by Sheila Yoshikawa at 20:04

It seems everybody who is in SL longer than a year and does not like under a sculpted rock has a sad love story to tell (including myself). you live, grow and sometimes learn by your mistakes. The folks who (still) advertise their sad love stories in their profiles have - unless it was very recent - not grown and not learned from their mistakes and are prone to find themselves in the next sad love story soon. Inviting them for tea might be a bad idea. Or a good one.

Hmm I think that means I've been under a sculpted rock. But I suppose it depends on what experience/ expectations you come in with ... anyway it's been an attractive and entertaining sculpted rock.