No. of presentations on SL given to librarians: 2 (good); No. of times that was assured that SL would be installed and it wasn't: 2 (bad); No of people stumbling into SL demo who turn out to be audience members: 1 (bad)

Gave quite a lot of talks at conferences during the last month or so, including some on SL. Two that were just about SL provided some lessons for the future:
1) Lesson 1: When people say SL has been installed, do not believe them.
In both cases we had said that "You will need to install the Second Life browser (at the venue) and you need to test out SL to make sure it works". Have decided that people interpreted this as "You need to make sure that you can go to www.secondlife.com and log in".
Time line for first talk was:
- zero hour minus 2 hours: arrive at venue, am greeted warmly, escorted up to room. Am not able to get into networked PC since greeter does not have password to login. She disappears saying techie will be sent.
- zero hour minus 1 hour 40 mins. 2 other conference speakers have put heads round door and said they are lost and can I help them. I have established that own laptop will sort of do SL with my mobile 3G stick in a laggy kind of way, and plug into the data projector. Co-presenter (Ishbel) arrives.
- zero hour minus 1 hour 20 mins. Ishbel establishes that her laptop works with her mobile stick. Then both our mobile sticks lose signal and SL goes phut. Someone arrives with password for networked PC. We establish that it does not have SL anywhere on it and we cannot install SL since we are not admins. Ishbel phones techie help desk several times and finds that techie has gone to tea; also confirms that that network cable is too short to fix to my laptop. 2nd co-presenter (Lulu) arrives. She does not have a mobile stick, not that this matters, since we have a superfluity of non-functioning mobile sticks.
- zero hour minus 1 hour. Someone arrives with a cable. It is the wrong cable. Finally techie arrives with correct cable, joins network to laptop and We Have Liftoff. 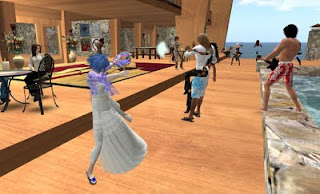 Similar experience with 2nd talk, but in more concentrated form. Networked PC was already switched on, so was quicker job to identify that SL was completely absent from it, and also work of moment to plug my laptop into network and data projector. Also it picked up strong Eduroam wifi signal. Thus seemed all roses at point at which techie arrived: however fraught 20 mins followed as both of us completely failed to get an internet connection, even though laptop insisted it was connected. Breakthrough came 5 mins before zero hour, when one of the audience (who had seen our fumblings via the data projection) gently told us that she had noticed that the WORK OFFLINE box had been ticked. oops.

With 2nd presentation, done jointly with Kitty Mumfuzz (a recruitment specialist in RL), had not prearranged to meet anyone in SL during the SL demo. Have got to point where there are always a couple of Friends online, so thought could probably tp someone in to show there is Life in SL etc. However, this proved needless, since when rezzed, saw that someone was already on Infolit (unknown to me, but think he was from Open University) so was able to say Please Say Hi To A Roomful of Librarians and so forth. 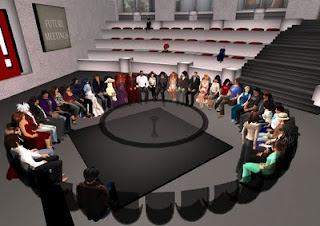 Then yet another person turned up. Thought name was familiar, but couldn't exactly place it. Went through the Say Hi To The Librarians bit, and then went on to do a tour of Infolit. However, the 2nd avatar kept following on behind, which was Ok, but felt a bit awkward since felt I needed to explain what I was saying in RL, but really couldn't do that AND attend to the RL audience.

Thus I resorted to cheap laughs in terms of "Oh dear, here's XXX yet again!" and generally the whole talk seemed to go pretty well and the audience went away smiling. Except that is for the person who approached us at the end and revealed himself as - the 2nd avatar. He had meant to say who he was earlier, but once I started treating him like a joke stalker he felt too embarrassed.
Obviously, felt v. embarrassed myself and was feverishly trying to remember if had said anything really rude about his avi. Was also reminded that had met avi more than once, which heightened embarrassment.
Anyway is certainly something which will bear in mind in future. So, if you happen to meet me and I tell you to Say Hello To The Librarians you can rest assured I will not be mocking your clothes, profile or demeanour, for fear that you are lurking in the audience.
Photos: I didn't take any pics of these experiences. Instead:
The first pic shows the self-affirmation bear. You click him and he gives you random self-affirming thoughts, of varying degrees of humour. I liked: You have a beautiful smile animation. Secondly you see a dance I attended at Cafe Ristretto last Thursday, with live music and benefit to supporting HIV/AIDS awareness. Finally we have a pic of the SL Educators Roundtable that took place last night.
Posted by Sheila Yoshikawa at 20:22

OMG LOL I probably shouldn't have laughed that much, but seriously that was hilarious, I was hoping you would talk longer, it was very entertaining, now you just have to send me a LM in world or comment on my blog with a slurl :)