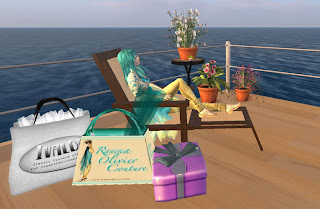 Slidecasts created: 2 (good)(in my opinion); Software installed: 2 (good); Deadlines met: 1 (almost)
If you like long, rambling posts with accounts of ill-planned attempts to create Web 2.0 presentations, then this one is for you.
On Thursday, or to be honest was actually early hours of Friday, finished almost-overdue presentation for virtual seminar. Seminar turned out even more virtual than had first thought i.e. even though it was scheduled for a particular day, was no obligation to do anything except provide stuff in advance & look at forums afterwards.
Topic was information literacy in virtual worlds. Decided to create a page with links to videos, make 2 slidecasts and put in some narrative to explain what was what. Original plan was to use page of iSchool wiki, but pbworks seems to be unobtainable a lot this week (memo to self: back up those wiki pages!) so plumped for my Netvibes space instead. To cut to chase, the page is here: http://www.netvibes.com/sheilawebber#Using_virtual_worlds
Had already had one page on Netvibes devoted to virtual worlds, but half of that was about Google Lively, which is of course an Ex World, so cleared it out and started again. Knew I wanted to link to some Gobal Kids material and also found an (I think) excellent video about SL in schools, on Teachers TV. Spent some time trying to find decent stuff showing libraries. Included the “I am Library” video that HVX made, but otherwise there seemed rather too many talking SL heads giving presentations of varying quality. 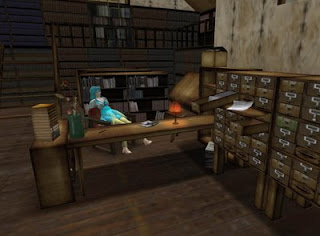 My own presentations include some slides that will be familiar old friends to anyone who has leafed through my Slideshare space, but of course put into a fascinating new order and DID create some new ones, since this is aimed at school librarians. Decided that had to do more than intended when dipped into logs of a couple of chat sessions from the virtual seminar in which participants were slagging off (politely, of course) the presenters for just putting in dry powerpoints and not focusing on the interests of the audience.

Doubtless own contribution will still be unsatisfactory as regards school librarian focus, but have Made an Effort. Biggest effort was in doing My First Slidecast. Indeed is My First MP3, since have not even done my own podcast before. Started by uploading ppts to Slideshare and looking at a v. useful Slidecast showing how to create Slidecasts. This was created by one of my Contacts, and it was only at this point (2 years on from joining Slideshare) that realise that this person is like Tom on MySpace, i.e. he is EVERYONE’s friend.
Hunted in a desultry way through programmes on own computer, but feeling that currently did not have voice recording software was confirmed. Could have used MP3 player, but this would have involved uploading software to work pc that currently was sitting on a CD at home. Therefore Googled “Creating MP3” and when that didn’t seem to bring up the right stuff, “Recording MP3”. A top hit was Audacity, which immediately recognised as being subject of various postings on SLED list. Was free, so downloaded it, hurrah. 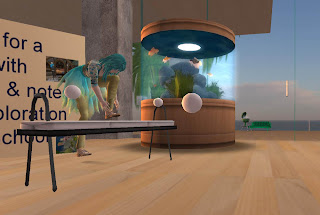 Most troublesome phase was next one, i.e. getting Audacity to admit that I was saying, or later, shouting, things into my microphone. In sum, after reboots, countless trys at the Sound Test from the Windows control panel, several trawls through Audacity Help, plugging microphone into all possible computer orifices etc etc realised that problem was that had failed to set Microphone to correct device in Audacity Preferences.

Then seemed doddle to talk through slides in first presentation and time finally came to Export to MP3. Was minor delay when was prompted for unintelligible thing called LAME, and am still not exactly sure what LAME does. Anyway, was beyond asking Why at this point, so Googled LAME and turned out this was something that could download from web at only 2nd attempt (not sure where the first download ended up). Then it was scumble scumble and a sparkley MP3 was sitting in my Second Life folder. As recommended by Everyone’s Friend, I uploaded MP3s to Archive.org. Not quite sure why I did this, since it appeared afterwards that could have uploaded them to Slideshare, and also could have just bunged them on the university server. However, there they are, at ....
Finally the thrilling moment came to Synchronise slides with audio, which was actually quite fun. Then there it is, my first Slidecast. I will embed it here.
Information Literacy in virtual worlds Part 1
View more documents from sheilawebber.
Second one obviously took less time, but did have upset in that when nearly at end of first recording Audacity Unexpectedly Quit. Hate it when that happens. When rebooted, Audacity told me that if I didn’t press delete the unsaved files would be in a manually recoverable temp file, so as you can imagine wasted time trying to locate temp file. Turned out that, since this was yet another thing had failed to set in Preferences, temp file had gone irretrievably to temp file graveyard. Second slidecast may therefore seem a little rushed as was getting tetchy by the second time round.
If this is podcasting, doesn’t seem too difficult. Of course would take much longer if had been troubled by any perfectionist scruples that required editing out background noise, adjusting audibility etc. May revive ideas for regular Information Literacy Hour, or perhaps Information Literacy 10 minutes might be more palatable. Perhaps should get feedback about whether people can understand what am saying before devise too many grand podcasting and slidecasting plans.
Pictures are: Me on Infolit sun deck with latest batch of DSN network, me in the National Library on the DRowsy sim, and me with new acquarium and cinderella shoe bench.
Posted by Sheila Yoshikawa at 16:07

LAME is an MP3 encoder DLL.

There was a time until very recently when Fraunhofer would bash anyone who dared to encode files into MP3 over the head with their patents unless they paid up. Eventually, lots of software switched to dissociating itself from MP3 encoding by using LAME, which was invented for that purpose. If you don't distribute LAME, Fraunhofer can't extort you with their patents, but if you can use it, the end user can download it separately and there's no way to catch all end users.

Fraunhofer doesn't do it anywhere that much anymore, but the practice remained.