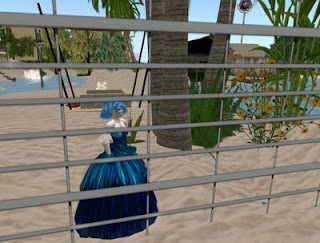 Trees moved: 1 (irritating); Wire fences erected: 1 (bad)
The SL blogs I follow are producing thoughtful and sane postings, but I will take the opportunity, being on my personal laptop, with a good network connection (in Reading for a RL conference in a student bedroom: free broadband!) to post some pics that are on THIS machine.
Yes, it's neighbours. Got a polite IM a couple of weeks ago, asking me to move a tree. In fact person even said how much tree would need to be moved (3 metres approx) so it no longer overlapped new neighbour's land. Apparently tree was causing anxiety, though is perfectly well behaved tree from the Heart Garden Centre.
Tped in and found - a a sort of compound. 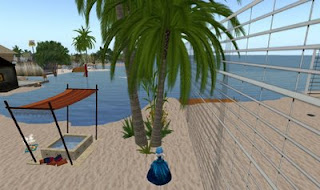 You see here the offending tree (which I duly moved) and the compound. This is a beach with unrestricted view of protected water. So why would you want to spoil your own view with wire mesh and a bunker-like house? Oh well, at least it only spoils MY view if I look sideways.
In fact has been a lot of buying and selling going on around me: well, actually, more, land being put on the market and NOT selling. One chap IMed me to ask if I was interested and when said no as am maxed up to tier limit, he IMed me AGAIN only 5 mins later, obviously (to judge from the message) under the illusion he was IMing another neighbor. Interestingly, he was asking for more money from the neighbour than he did from me.
Neighbour on other side is also selling up 2/3rds of her land - the rain soaked graveyard scene has been turned into a cute house, as I'm sure any Relocation Relocation show would have advocated. Though of course the graveyard might have been a big selling point to goths. Perhaps she should get a holodeck so people with no imagination of their own can see it with the ambience of their choice. That would be a jolly useful feature when selling RL houses.
Posted by Sheila Yoshikawa at 17:44

You could ask the neighbour to make the fence on your side transparent - so your view is unobstructed whil eh can enjoy his wonderful, standard freebie pack texture metal fence.

If he is unwilling, you can erect a fence of your own with invisiprims and therefore not only block out the fence but also his bunker-house and everything else he might chose to put on his beach from your view. Invisiprims are tricky and error prone, but quite good for this type of cosmetic correction.

People are most bizarre! I do miss my SL ... have been so busy with the wee ones and work and life that Citril is sadly neglected. I think once I moved and sold up my land, that was it - I had no base and no place to call home, if that makes sense! Anyway - miss chatting with you and Ishbel!