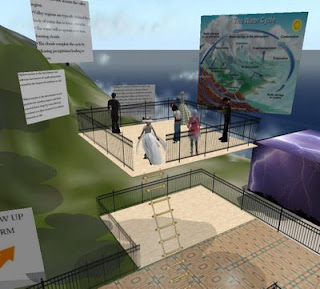 Calendars created with Factory: 1 (good); Student installations visited: 2.5 (good); No of different computers, data sticks etc. through which SL pictures are scattered: 7 (approx) (bad); No of SL pics on Flickr: 1000 (approx) (um - good?)
Time was that only place I stored pics of SL was on the hard drive of my work PC. They were organised neatly by month, since at the end of each month would move all the previous month's ones into new folder. Now and then would back these up by copying onto Departmental server.
Alas, all this went to pot when started using other computers: my personal laptop, my home computer, plus got new work computer last autumn (and still haven't transferred pics from old PC), and also started saving pics directly to a memory stick, or one of two different folders on the server. Have uploaded some pics to Flickr, but only a percentage: since there are 1000 on Flickr, dread to think how many there are in toto - 3000 perhaps? For someone teaching Information Mangement this is a pretty poor show, though could pretend am setting myself up as a case study for a student project.
All this is prelude to saying that have lots to blog about last week, but since am on home computer, only pics that can show re the week are from today, so that is where I will have to start. 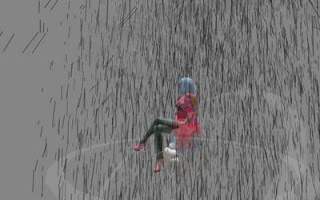 Was intending to finish off marking, but wandered into SL to update the board that says when the next Infolit iSchool Discussion is going to be (23rd July BTW) and realised that a presentation from North's students was taking place at that very time. His message said: "summer students have been working on exhibits that can be used by middle school science teachers to "spark" interest in science. Larry Klugman served as the client for the three exhibits - Physics of a Homerun, Thunderstorms, and The Atom Bomb."
These are always interesting, so tped over (and that was the rest of the evening gone, essentially).
These were all designed so that a teacher could go inworld and then show their schoolchildren (in the classroom) round. The Atom Bomb involved sitting in an atom chair and having an automatic guided tour round: first of all some background on the Manhattan Project, then a bit of the science behind it, then experience of different effects (e.g. black rain (2nd photo), pulsing light), finally pictures of victims and the area affected (3rd photo). 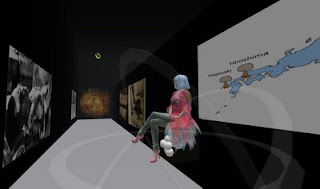 The end part was particularly powerful. Was impressed by all the parts, but only constructive criticism would be that it might be a long tour to have in one go, and might be better broken up into sections.
There was a queue for the tour, so first had visited Weather Experience, with Clouds, Mountain Rain and Storm. RL cooperated by demonstrating what a summer rainstorm is like, so had RL sound effects along with SL ones. All three exhibits were attractive, with the clouds moving, the signage on the mountain particularly good (first photo), and the tornado had some cows in it (but unfortunately didn't get a pic of that).
Almost saw the baseball exhibit, but when bounced out to watch accompanying Youtube video, crashed from SL. However, since baseball itself is a veiled mystery to me, possibly am not the ideal audience anyway. 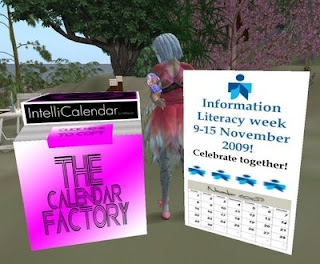 Then spent a while trying to find things in inventory, and partially failing. However, thought could at least display my first calendar produced with the Calendar Factory. You simply rename 12 textures Jan, Feb etc., and pull them into a calendar blank. Also can insert a logo: in this case the international information literacy logo. Once calendar is complete, position it above the Calendar Factory (not inside it, that doesn't work, I tried) click the factory, and duplicate calendar appears. This 2nd one can be copied and transferred, but doesn't contain the actual textures, so you can set it for everyone to be able to copy around, or sell individual calendars. You have to keep the original in your inventory.
One catch is that each time you need to create another (different) calendar you have to buy another 100 Linden calendar blank. However, not like am going to create 100s of them.
Gave out the calendar at the Infolit iSchool discussion on Thursday, though perhaps people weren't as stunned as had hoped. 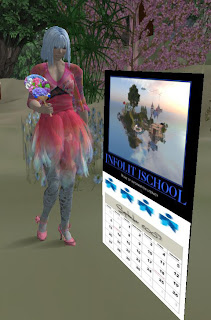 Other things done this week, that may or may not blog, were:
- attended launch of Centre for Study of New Literacies in RL, and met RL alt of Anya Ixchel, and spotted that in SL she was wearing a dress from House of RFyre (i.e. can recognise work of SL dress designers from back of room in dim light, how sad is that)
- gave talk about SL at University of York in RL
- attended Educators Coop chat
- had Thursday discussion (as noted) which led to demo from Graham on his island, then chat with Adra
- sent notecards to various people about the Information Literacy Week
That's quite a lot really, for a moderately quiet week in SL.
Posted by Sheila Yoshikawa at 16:52