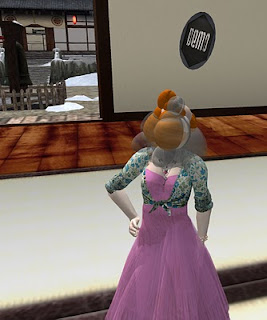 Hair bought: 2 (good)
Today visited Kin, which is shop where bought first proper hair, Kin's Ryuzaki. Rereading that 2007 post, note that at time thought hair might be "too cute". However, compared with some of the stuff have been wearing recently is relatively low on the too-cute scale. Realise that worry about being too-cute has been with me from start, but think that gradually cuteness threshold has risen.
Kin has now gone in for sculpted hair, which as always can be a bit alarming whilst it is rezzing (see first pic.).
However got. v. excited when realised that some of the demo hair at Kin is actually in MY COLOUR i.e. blue, which is something of a first. Normally demo hairs are in some random "normal" colour, and require some hope and imagination to visualise what will look like in blue.
Therefore could not resist buying a new Kin hair (see 2nd pic), which is actually a bit like Ryuzaki, but sculpted, so does not wave around in breeze so much. 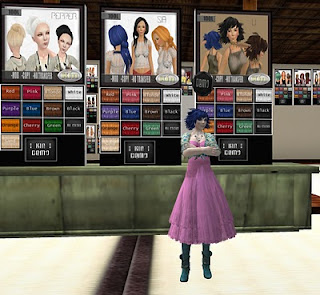 Scoured walls to see whether Ryuzaki is still on sale, which it is, and was cheered by that. For months was really the only hair I wore and ended up buying it twice, since the first time around did not know about how you should COPY your hair before stretching it around (for a back up), so first Ryuzaki had to be abandoned in the end as it got somewhat malformed, with strange giant strands. Happy days.
Second hair, BTW, is a newish one from Exile (which does some nice blues). Is another "turning into me" kind of hair, since is long and straight, with a windblown effect. Evidently have learnt little from past experience since couldn't be bothered to copy it and instead started editing and stretching it straight away to try and get rid of bald patches. It still looks cute. Think the new Kin hair is more SL-me, though.
Posted by Sheila Yoshikawa at 18:21