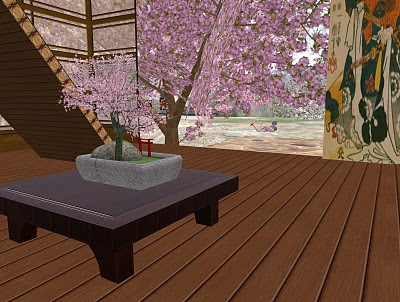 Sakura bonsai bought: 1 (v. good); potted sakura hauled from inventory: 1 (good); sakura petal emitters removed from shop: none (bad)
Today went windsurfing in Bora Bora (for this photoshoot) and ended up browsing round the tikis. Discovered quite a bit of new stuff, including a whole gardening area that was new to me.
Included v. cute display of bonsai (see second picture), and could not resist cherry tree bonsai, which took home and positioned in entrance hall of the chinese house that is tucked on the hillside at Noyo.
From the start in 2007, have named my home land "Sakura" (Japanese for cherry blossom/ tree). So my first plot was called Sakura (as you can see here) and so was the land I have just given up and am still trying to sell ;-(( and now this new land in Noyo has been renamed. Have also kept in part of the original name, Urtahra (see here, Noyo was originally part of the Kahruvel Forest).

I always have actual Sakura on my land, and you can see some of them outside in the first picture, a big pink tree near the entrance and some white blossom further off. I am lying on the rocky ground outside, listening to Ishbel's windchime and enjoying the view.
Also did a little bit of tinkering in the room next to the entrance hall, where have put some of my pictures (ex shop), a small sakura in a bamboo pot, an information literacy calendar, and a teleporter to infolit locations.
Have been meaning to put in more information literacy stuff, but so far that and Woolley the Sheep are it. Am wondering about putting Woolley (who contains definitions of information literacy and bleats) with the Heidi House sheep, but he might get an inferiority complex as they are infinitely better made. Well not infinitely, but a good deal. 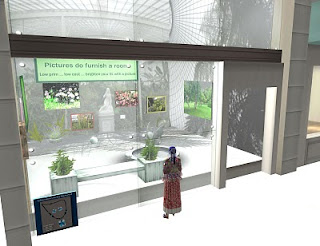 Have also changed exhibition in my shop. Theme is now Glasgow Botanic Gardens, which visited last week in RL. Am v. fond of it: when lived in Glasgow, Botanics were only 10 minutes walk away. Background photos on walls and floor are of Kibble Palace (which houses national tree fern collection) and there are some photoshopped pictures of the carniverous plant displays plus some pics from a park in Prague. A stone dragon creature creaks and turns head to face you: have been meaning to find somewhere to use him for a while.
Display also includes falling sakura petals. This was not intention. Petals were part of previous display and spent at least 20 minutes trying to find out where the **** the petal emitter was. Tried CTRL ATL T to see invisible prims, cammed all over the shop from various angles and so forth, but thing is nowhere to be found. Anyway, falling petals not wholly inappropriate to this exhibition so in the end gave up.
Posted by Sheila Yoshikawa at 14:21