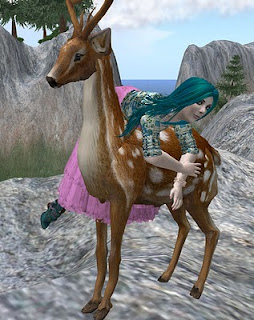 No. of poses in deer: 13 (unlucky for some?)
After last post decided should actually show cute hair from Exile (have already forgotten name of hair and can't be bothered to log back in and find out. Think it began with a K. Karen? Kerry? Something like that).
Since deer on mountain automatically = cuteness, decided to choose one of the dozen poses available when you sit on deer. Was intending to use Hug Deer pose, but turned out that this meant that ends of hair were poking out of deer's nose which ruined effect rather. Am not 100% sure about this pose, though. Is it cute, or is it just a bit weird?

For second attempt at cuteness posed in new cherry blossom hillside path that leads up from watermelon shop to shrine-y building that just put in, halfway up mountain. Surely can't go wrong with cherry blossom. Think this is probably more straighforwardly charming, but slightly vacuous.

Vacuous or whacky, which is cuter? You decide. 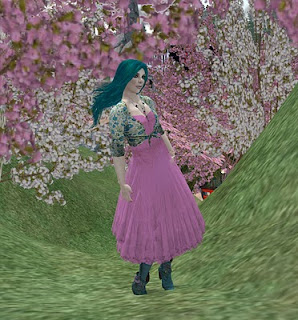 Posted by Sheila Yoshikawa at 19:27