Utopias visited: 4 (good); Artwork discovered near my land: 1 (good); Amount of land still held in Harms Way: none (good, but not exactly profitable)
Recently discovered four sims which are Art, namely the four Utopia sims which have been created by Bryn Oh. Dimitrova visited Utopia 4, and then a couple of days ago I did a Utopia hop of the other 3. Spent most time on Utopia 3 where there is a spooky statue (see pic) and a very creepy building.
When I got there, realised that it had been blogged by a couple of people on the fashion feeds: one of the features is a tree that turns slowly into a column of shopping trollies. Anyway, there is lots to see and do. Can buy the spooky statue (huge) for 15000 Linden, and is a bit tempting. Coincidentally then discovered that have another artwork by Bryn Oh on my doorstep: next door but one, so to speak. Was created for Helen Keller day last year and seems to be on Linden-donated land. Bit embarrassing that didn't notice it before, in fact. Anyway, adds further to general desirabilty of location.
Location is too desirable if anything; old land was just too laggy and busy to enjoy being on it, but now is very pleasant calmly to do tai chi overlooking the river and cherry blossom, or clamber around the mountain top tweaking the odd pine tree, or sit indoors contemplating view.
Also has distinct zones so am plannng to have some areas stable aand others which can play around with. Was reflecting on fact that thing am most pleased with is the "What Information/Literacy means to me" exhibit, and should really experiment doing more installations with words and visuals. 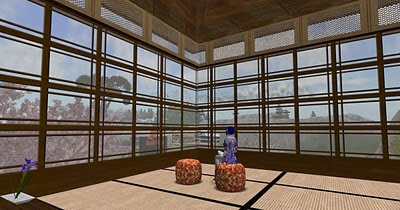 Have finally said goodbye to all old land in Harm's Way. Following useful conversation with neighbour on old land (who turns out to be friendly and nice, bit late to discover that) parcelled up land small and lowered price. She also said if land set to 0.5 Linden per metre would be picked up by bot and sell instantly. By tier date had only sold two plots, so set all the rest to low price and indeed they all immediately converted to Linden, not that many Linden, but still will keep me in shoes and artworks for a few weeks. Unless I buy the statue, that is.
Posted by Sheila Yoshikawa at 13:04