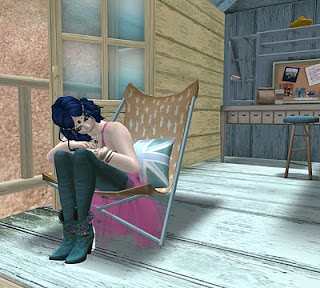 Beach huts bought: 1 (patriotic); Weeping willows bought: 1 (pretty but superfluous); Fawn with 13 poses bought: 1 (v. good); Set of scuplted stone and garden stuff bought: 1 (good); Hot springs installed: 1 (v.v. good since was already in inventory)
Despite fact that already have 34,000 items, new land has stimulated consumption lobes, even more so since have actually sold one chunk of land (which is now on sale again at higher price, but would say likelihood of resale is correspondingly smaller). Thus have linden burning holes in virtual pocket.
Have created willowy waterside area, with variety of willows (i.e. willows made by 3 different designers) and decided that needed beach hut to complete this area. By happy chance, one of the offerings for Spruce Up Your Space this weekend was an English beach hut, complete with Union Jack details (actually to be ENGLISH should really just be St George's flag, as currently being torn off a zillion car aerials following the mollocking of England by the Germans in the world cup) (and what's with the blue union jack? perhaps it indeed symbolises the spirit of the nation following defeat). 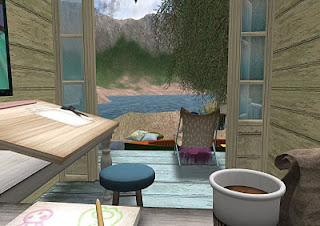 Anyway, spent happy hour setting hut up and furnishing it with some items from the Bloggers Hut that was a previous SUYS buy, plus a couple of sculpty shells and one of my own pictures (duck on boat in canal, appropriate I thought). Also put in Antique Typewriter that bought ages ago, which tells people whether Sheila Yoshikawa is online and allows them to send me IMs. Obviously am hoping that these will be IMs complimenting me on exquisite taste and hopefully not complaints about blocking sea views or polluting riverside with excessive willow leaves.
Posted by Sheila Yoshikawa at 14:32