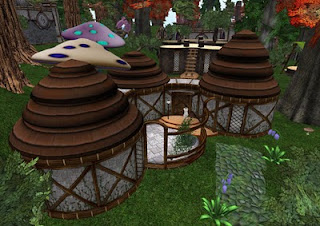 Was tempted into SL action by the announcement today of the "free homes" available for premium residents. This is an attempt to get more people staying in SL and starting to pay tier. You don't have to pay for the land, the ready-made houses don't count towards your prim allowance (a definite bonus if you only have the minimum area), there is landscaping, and paths between the houses, and you are guaranteed not to have a nightclub start up next door.
It's an interesting move towards a "housing estate" approach to mainland, away from a North American free-for-all: though of course some people have been offering these kinds of environments on a rental basis for ages. 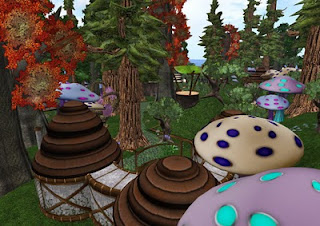 I went premium with Dimitrova, my main alt, when I cut down my personal land, but found that I was going over into to the next tier if I kept the amount I wanted to. It was cheaper to have Dimi go premie, so I could sell her the land for 1 Linden, and make her a buffer between me and nightclub land. However, I then found it was more interesting still to move her around to explore living in a couple of other different places. Now she has taken up the Lindens offer, abandoned her old tiny plot (land prices, already dire, will go even lower, so pointless to try selling) and opted for a dwelling in what appears to be The Shire, except they can't call it that for copyright reasons, I presume. 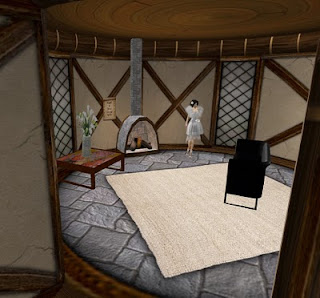 The pictures show her 3 roomed house from 2 angles, plus one of the rooms. You'll see it has integral mushrooms. The houses are not really state-of-the-art design, but I imagine that is so the commercial house designers feel they still have some sort of competitive advantage.
I think that there will still be issues for newbies, since the rooms, being small, are difficult to position things in (the only "furniture" in it to start with was the fire, the other stuff belongs to Dimitrova). There was also a curious glitch that meant that any rugs I tried to rez were disappearing into the floor, and couldn't be spotted with any amount of camming round. However, there is more of a feel of safety and possibilities for meeting up with neighbours.
There were a good number of green dots on the map when she was there: though if everyone's an alt like me, community building will take a bit of time...
Posted by Sheila Yoshikawa at 19:52