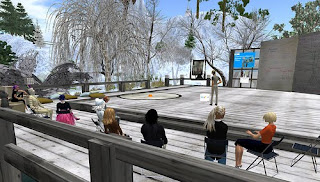 Today was host to UK Educators "Second Tuesday" meeting, this being (unsurprisingly) meeting of UK educators that happens on 2nd Tuesday of each month. Had dithered about where to host it, but then opted for Farradane Centre, since felt had not shown off glories of winter wood to enough people, plus it has enough space to do SL tool demos.
Therefore prepared space by:
1) Installing hot chocolate cabin;
2) Removing Floral Bench;
3) Putting more chairs, cushions and cardboard boxes round edge of platform;
4) Cleaning aquarium and feeding fish - nothing more offputting than arriving at a meeting and seeing a tank full of floaters. 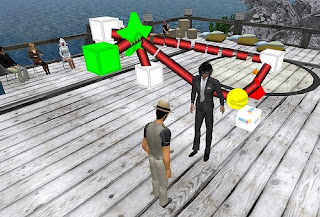 As witching hour approached had usual tension as to whether anyone would turn up, but in end was respectable number, including Csteph, who I had "shouted" at in Avatars United about the meeting. So, a use for AU, if only one so far.

Serious bits of meeting were about ideas for the Virtual Worlds Best Practice in Education conference, and Graham doing useful demos of 2 tools. Unexpected theme of meeting was vegetables, since emerged early on that Silversprite was balancing his Mac on his microwave whilst chopping vegetables for a stew (as pictured here: http://www.twitpic.com/129tuo - the titular parsnip is at the bottom of the picture).

Was much banter which seemed v.v. witty and amusing at the time, and in fact STILL seems at least v. witty and amusing when read the chatlog, however it could be one of those "you had to be there" type of things so will not reproduce it here. At any rate, banter extended to demonstration of wiki tool and Graham's Story Machine, since the nodes in the wiki became parsnips (or to be more precise, pasrnips, lord how we laughed at that typo), onion, butternut squash etc. etc. Discovered that Anyone could alter nodes by clicking on them, so wiki morphed into strange pulsating object, which Graham has kindly left behind so can show it to students this Friday as example. Will have to decide exactly WHAT it is example OF.

VWBPE conversation is in fact mostly being carried out in Google Wave, which deserves a whole post to itself, should I ever get round to it. 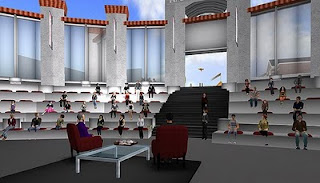 2nd meeting was Virtual Worlds Educators Roundtable in which was merely passive audience member whilst - to be v. frank - was processing pics from UK educators meeting. However, meeting was in Voice, so could listen on headphones whilst resizing, adjusting Brightness, uploading to Flickr and adding pictures to Groups and Sets. Did check back to look at local chat, but main questions had to be channeled via Google Moderator, which works quite effciently, but not sure about it as a combo with SL yet. You can add questions, and/or vote on other people's questions so most popular ones come to the top.

I happened to be logged into Blogger as Dimitrova at the time (finishing off a fashion post), so logged into Moderator as her too, and tried to vote on some questions, with mixed success (wasn't always sure why vote hadn't registered). 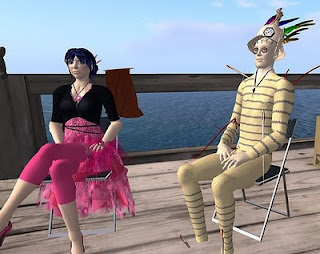 Until just wrote that down, hadn't really thought about how was logged into 3 different things simultaneously, well actually 4 since was also logged into the university portal, and all with different userids and with 3 different identities.

However, is all me, in the end.
Posted by Sheila Yoshikawa at 15:33