I am millennial (official) 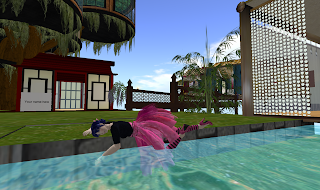 Score in millennial quiz: 73 (unsurprising); Houses claimed in Edu Informatics village: 20 (good)
Came across quiz on Pew Internet website, which gives you score that allegedly identifies whether you are Generation X, Baby Boomer or Millennial. Now in RL must be confessed that am middle one of these, but final score was only 1 point off the exact point for Millennials.
Makes sense, really, and explains why am likely to alienate friends through thoughtless blog posts, forget appointments and, after starting out very academic search for literature on information literacy, end up looking at site about the tree octopus. And latch onto spurious excuses for bad behaviour. 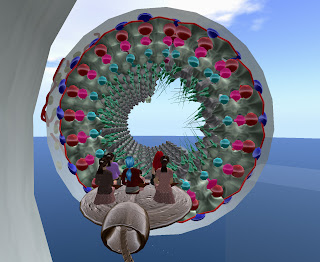 Had actually legitimately been quite busy in SL, finishing up arranging interviews for one set of students, and introducing a second set, namely our Educational Informatics students. Have again created an Edu Informatics village in the sky (1st pic shows me trailing hand in water feature in front of the 2 beach huts). Since people last year seemed to enjoy claiming houses and putting up their nameplates, made it more of a feature this year, and also did some on-the-spot deletion of unfavoured houses, and copying of popular ones, so the final village has more beach huts, japanesey houses and tree houses than originally.
Also visited Teesslife with some students, also Tour of the Testis, and Tim (co-working on a session) led a tour of the Canadian Border post at Loyalist College. Hope to post some of these pics, but feel should ask students first.
Apart from advent of Linden Homes (as claimed by Dimitrova, see previous post), big news has of course been advent of SL Viewer 2 in beta. Felt that, having only just introduced Edu Informatics students to old viewer, might be confusing to suggest they use the new one. As increasing number of problems reported, seems sensible decision. 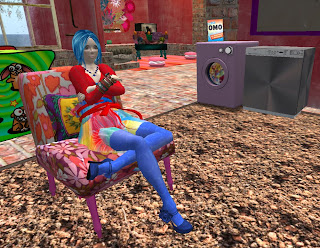 Is also a bit of an issue for the session that am holding on 18th March (which realise have not blogged about yet all), viz, event that has been accepted into official programme of the ESRC Festival of Social Sciences and even awarded grant of c. 50,000 Linden (at least, think that's how it translates), which aim to spend pricinpally on hiring someone to do a machinima. There is going to be an official press release and everything.

On a more trivial level, have a nice new washing machine.
Posted by Sheila Yoshikawa at 13:00