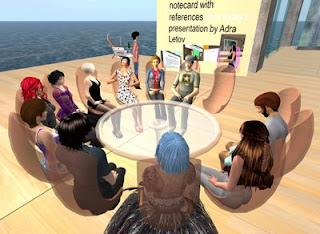 Am trying to catch up on backlog of recording info on discussions, amidst all the backlog about everything else. Life is just one long backlog.

Firstly was Adra Letov's meeting, The Information Environment is Affect-Driven held on 21st May. Adra (Diane Nahl in RL) spoke in Voice but helpfully provided notecards with text and refernces, and the rest of us spoke in chat. Have put texts on wiki here http://infolitischool.pbworks.com/IB-and-emotion%3A-Dr-Diane-Nahl-21st-May-2009 and chatlog is here http://sleeds.org/chatlog/?c=418
Was v. pleased that had persuaded colleague Nigl (who is information behaviour researcher) to come along, and Jackie, Ishbel, Maggie (& various others) were there too. Lot of interest and things to follow up. Humorous moment when Nigl sat accidentally on my head. Lol. 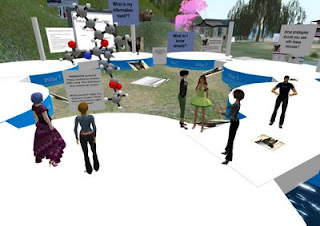 Last Thursday was the Swine Flu Information Literacy event. Graham blogged the meeting rather faster than I have at http://tidalblog.blogspot.com/2009/06/seven-pillars.html and managed to capture the Humorous Event of this meeting, namely point where I had dropped people a surgical mask and we had all donned them as if for strange ritual. Maggie added to this by wearing mask on head, which was, frankly, more becoming than wearing it on face.
Have put up chatlog (this was all in chat) at http://sleeds.org/chatlog/?c=417 and also have started up wiki page with some summary notes & explanation at http://infolitischool.pbworks.com/Information+Literacy+builds+-+Swine+flu where people are encouraged to comment. Or do visit the build at http://slurl.com/secondlife/Infolit%20%iSchool/169/189/21/ 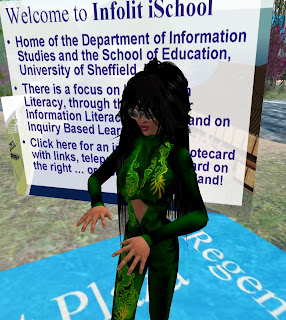 Feared this meant that Swine Flu Notecard, that had cheerfully told everyone to take, did not work, but everyone was too polite to say. Turned out (when tried clicking stuff just now) to be in poster that wasn't meant to have notecard, so all well. Apart from fact that some people probably thought they were MEANT to have a notecard. All water under bridge now, anyway. And is charming that Pig Poster was able to take part in Chat, even if contribution was on repetitive side.
After session was clearing up when Spotted Dousa on Regent Plaza. She ran an idea about student journalism interns past me - could be interesting. Graham also was showing a colleague the build, so island felt pleasantly busy. 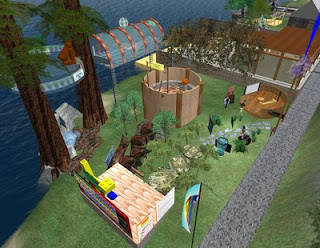 And after this stayed up far too late and ended up taking advantage of the open hours on the University of Washington sim (last pic), where there was a Maslow's Hierarchy of Needs build. You had to do a lot of climbing up and down, and there was some interactive element.

Was enjoyable, but am now wondering: did I learn anything about the hierarchy? Probably only clicked the bits and did the bits that looked amusing, rather than the parts which were most informative. On one hand, was frivolous academic v.v. late at night - on other hand gnat-like attention span probably means am rather like these millennial students everyone talks about. 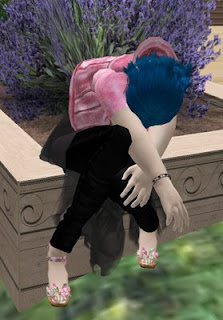 And now think Sleep has come to top of my Needs hierarchy, so will stop.
Posted by Sheila Yoshikawa at 15:57