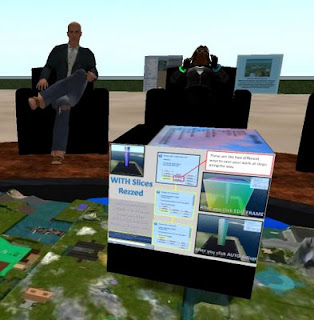 Sculpty classes missed: 1 (bad); Discussion lists and SL groups spammed with notice about 4th June meeting: 10 (good: unless you got all 10 of them, I suppose); SLED post score: 28 (good, ish); Lucky chair dresses snagged by alt: 1 (yay!)
On Monday attended first Educators Coop chat for a while. Unfortunately had not been able to go to a making-sculpties class organised by Rx, which was shame as sounded v. good. Pic shows Rx and a cube he used with screenshots of how to do things. Also shows unflattering view of Bluewave typing, sorry about that, Bluewave.

Received notice about Educators Coop Retreat at end of month which sounds v.v. cool, so looking forward to that. Remember RL friend going on retreat where chocolate was forbidden and she had to sneak out to munch furtively on a kit-kat bar. Obvious advantage of virtual retreat is that can be indulging in all sorts of pleasures of flesh (within reason) whilst simultaneously taking part in retreat.

Have sent out oodles of emails and notices re the meeting tomorrow at noon SL time, in which (I hope) people will turn up with good ideas for developing the H1N1 (or, as I choose to call it in populist fashion, swine flu) information literacy build. At what point does this become spam? Hope someone will tell me if it does. 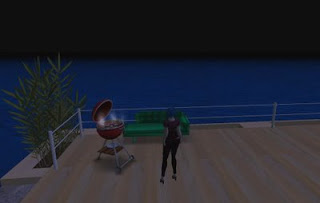 A SLEDer has analysed all the SLED posts for the last couple of years and posted a list of how many posts each person has sent. Rolig Loon came top, Graham also topped the 100 post mark, proving what a helpful person he is. I came in (as my RL alt) at 28 posts. Fear that most of those were announcements of meetings, as rarely contribute otherwise. On other hand, organising discussions is a contribution. They certainly aren't doing my career much good, anyway, so I hope someone is deriving benefit. (Hmm, must have had a glummer day than I thought)

On to more cheerful and even less impactful matters: have been zipping round moving the island from spring to summer, ripping out flowering cherries, bluebells and tulips, and putting in birch & aspen trees, garlic mustard and poppies, plus a couple of lavender bushes outside the Centre. As a finishing touch the sushi bar has been replaced by a retro barbecue (2nd pic): you can get wearable hamburgers, kebabs and - something else - is it sausages? I really mustn't go back in to SL just to find out. 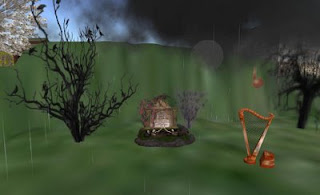 Back on my own land, yet more new neighbours, these ones (last pic) with a rather more morbid tone than usual. Note the twin skeletons holding hands across their graves. However, was much cheered to get unsolicited IM from complete stranger just to say she'd wandered onto my land and liked it a lot.

P.S. Dimitrova finally got her free Pizzacato Poppies dress after a mere extra hour of waiting. It was almost worth it. But not quite.
Posted by Sheila Yoshikawa at 16:59