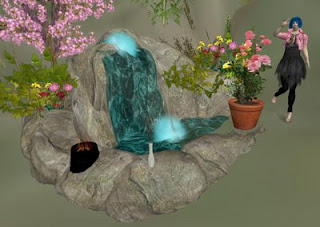 Items received from DSN: 15? 20? (who knows); Ratio of interesting to uninteresting items: 1:1 (not bad)
Have continued to log in eagerly to Accept the items from the Designers Showcase Network (see prvious post). Boxes of free stuff rattle into my inventory like rain onto ... onto land that is pretty damp already. However, present are always good, in my view.
On a serious note (to get that over with) I hope this is still going when I bring in students next academic year, since I could "persuade" them to sign up and it would give them regular practice in opening boxes and learning how to tell what you are supposed to do with stuff (wear, drag to ground, contemplate in wonder, send to trash). 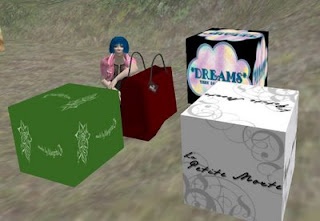 Also they could get some decent clothes out of it, because the stuff that is otherwise genuinely ok to pass round full permissions looks a bit dated in terms of textures and prim work.

You see here booty from a couple of days ago: a waterful complete with rocks and plants, a rose bush in a pot, a vase of flowers, and a little brazier. This was actually the box that the real present came in, but I thought the box was more interesting than the contents.

If asked who produced them, I'm afraid that all I can tell you is that the fire-thing came from a designer with the word Phoenix in their name, and the waterfall was from Perfect Prefabs. I know this as it is the first designer where I have gone and looked at their stuff, and I was sorely tempted by their Waterfull Cave grottos. I may yet indulge in another waterfall, though goodness knows I have enough of them already in my inventory. This was a good example of a designer I've visited some time ago, and it was useful to be reminded to go and look for new stuff. 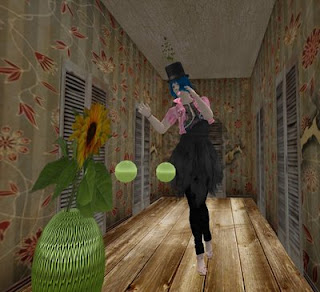 The 2nd pic shows me peeking out from behind yesterday's boxes before I unpacked them, then using a couple of them: a corridor "set" (mainly aimed at fashion bloggers), another plant, the hat with flowers & a veil (cool, I think), a heart-emitting cookie (in my mouth) and the pose itself.
The final set of pictures are from Friday: longing in front of the boxes and then using the sofa. The reason I couldn't use the sofa to start with was that when I clicked to Sit on it, it gave the message "no place to sit", which is not the kind of feedback you expect from a chair.
In the end I found a place to click that allowed me to sit, but I would say I have identified a design fault. 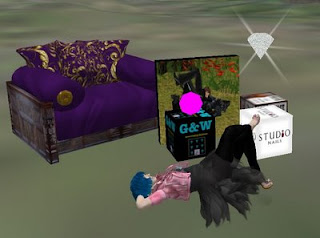 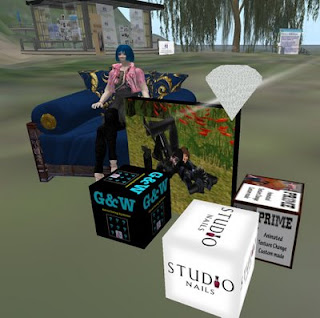 Posted by Sheila Yoshikawa at 07:23