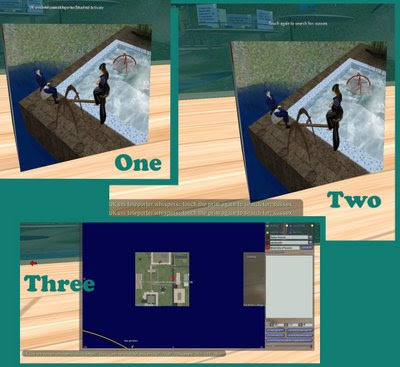 Am currently on travels again, trying to fit marking around doing academic things in exotic (Thessaloniki) and less exotic places (Manchester) (OK, suppose Manchester is exotic to some people). Am thus getting few opportunities to meander round SL. Am restricted to brief sorties to see what is free this morning from the Designer Showcase Network (see previous post) and pick up IMs and the odd prim.
Most useful prim is not from the DNS, though DNS has subsequently yielded some cute household goods from Second Spaces (cushions - you can never have too many - and bathroom vanity jars - well, why not?), and more useful poses. Also one gown which will try on when can prise self out of current outfit. Other stuff more dubious, though sure will find a use for the operational swing door, they always come in handy.

Will note here that, whilst unpacking, noticed odd glitch in SL, that everything was being rezzed and copied twice over. This was baffling at first when rezzed box containing various DSN objects, and they appeared to still be there even after deleted them. Then noticed that was getting 2 sets of objects, landmarks, notecards etc. and also when examined land, list of of Object owners was duplicated. Hmm. Am hoping this is strange quirk to do with wifi connection in Thessaloniki hotel. 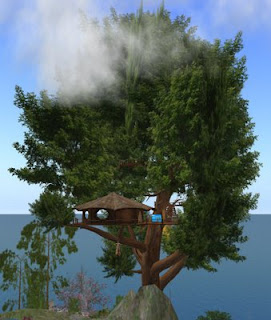 Anyway most useful item is from Graham, who has produced simple prim that when you click it turns into searchable database of UK university SL properties. Cool or what. Includes Infolit iSchool, am pleased to say, plus 40-ish others. When you select a university, the map pops up with the right place marked and you can teleport in with one click.


Have placed this useful prim in the library on Infolit. Could not resist texturing it with pic of me and Nigl in academic garb on a seesaw. First picture, above, shows 3 stages in the process of tp-ing to a university. Image for first step has illegible text because a) This is a small image b) "twinning" glitch appears to have affected this prim as well, so here you see 2 conflicting hover texts and c) did this quickly in Photoshop and think I stretched the photo by mistake.

Actually the whole thing is illegible unless you CLICK on it to see the picture full size. If you do, you will see the hover texts and dialogue onscreen. Best thing is to visit the library in SL and have a look.

Speaking of places on Infolit (to change the subject) appear to have failed to blog the new tree house on Infolit. This is serious omission. 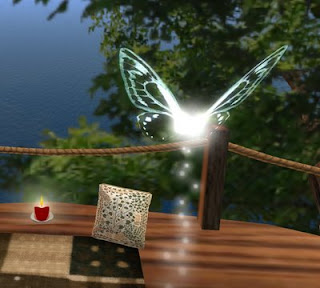 Had been feeling that previous tree house was starting to look its age, and then spotted a feaure about tree houses on a blog. Thus the Denmark tree house somehow found its way into my inventory. It is v. atmospheric and has operational lift. Came with candles that emit fireflies (romantic!) or butterflies (colourful!) and candles that emit bird sounds (some of the birds actually sound like they are being done to death, but still).


Took off roof of top house in tree house to make romantic/utile platform, and this is where last week's infolit discussion was held. Since still have not uploaded chatlog etc etc will give sneak preview of one of the participants, namely Pancha, who was wearing a supercute butterfly Avatar.
Posted by Sheila Yoshikawa at 17:17