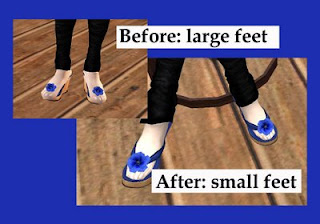 Shapes lost by Linden Labs: 1 (v.v. bad); Times trapped under umbrella: 1 (OK); Times part of land unexpectedly disappeared then unexpectedly reappeared: 1 (fortuitous)
Talked to yet another person in RL who was sceptical about SL because they found it difficult, kept bumping into things etc. Ruminated today on how you *keep* bumping into things in SL, but suppose difference is you get to know:
a) bumping into things is ok;
b) how to get out of places when you are stuck;
c) when you do, and do not, need to worry when strange things happen.

For example: when I teleport in somewhere and find myself about 10 feet off the ground unable to move and with my arms and legs waving - know that this is usually because there are loads of people tp-ing to the same spot and I'm stuck on the top of someone's (currently invisible) head. Normally if you just wait they will move and you can proceed as normal, or at least you need to wait til things rez and you can see what the problem is. Glitches over the past days include:

1. My shape disappeared from the Database. I noticed this 20 mins before giving a presentation on Thursday and it did not exactly reduce the mild sense of panic I already had. Had noticed a message about something not being found in the database but simply clicked it away and it was only when I cammed out to see the poster I was preparing I suddenly realise my feet were larger than my shoes (see first pic) and my hands were like dinnerplates. A quick inspection proved that other parts of the Yoshikawa Shape were also different. Attempts to Wear "My Body Small Feet" failed miserably and so had to disappear underwater for a quick slider session, reducing (e.g. foot size) and increasing (e.g. body fat) various aspects of appearance. 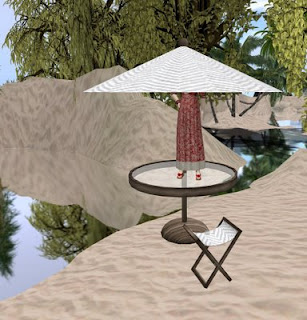 My Body Small Feet is still Absent Without Official Leave. This is indeed Worrying as perhaps is sign that having reached 25,000 items my inventory will go AWOL piece by piece ... on the other hand is problem (apparently) with central database rather than actual inventory. Not sure which is worst.

2. When trying out a new DSN gift, namely parasol table and stools, placed stool too near table so that, on standing up, was catapulted onto table under parasol and trapped (see pic). This is one of those situations where one's Virtual Literacy skills come into play, since know now that easiest thing to do is to find something to sit on (in this case, stool) and then sit on it.

Also since have editing skills, could move stool backwards so didn't get trapped again. In early days would have wasted time struggling this way and that. Associated is the "when it's very laggy rez a box, sit on it and move that around" solution (see also: jumping from pose stand to pose stand to move in a crowded fashion store) 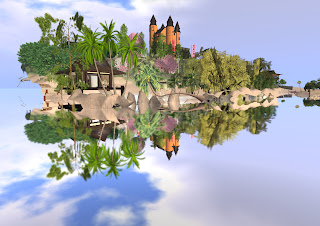 3. Teleported home to create poster during Educators Coop retreat (see last post) to find that the bit of my land that is in another sim had disappeared. In fact the sims on BOTH sides had disappeared. However, since this is mainland & my payments are up to date, did not panic. Instead took the opportunity to take mirror-water reflection of the land that HADN'T disappeared (see third picture), so actually saw it as happy chance.
Opened Map to see whether the sims were offline, but there they were, as usual, and when teleported to the land-on-other-sim - everything was as normal. Odd.
Perhaps this is actually example where should be panicing - is this the beginning of the end? The whole of the mainland flickering in and out of existence? But seems more likely that it is glitchy business-as-usual.
Posted by Sheila Yoshikawa at 11:36