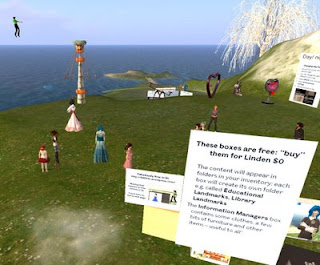 U. of Hawaii Students shown round island: 5 (good); Masters Students inducted to SL: 9 (good); Broom rides installed : 2 (good); Trampolines installed: 1 (v. good)
See from quick scan of favourite blogs that others have been blogging some video called World Builder, trying out new educational tools and other admirable activities. In contrast have installed trampoline, removed crunchy snow & holly, planted hyacinths and created a glass observation basket using a snowdrop texture (plus a first attempt at a particle lamp). Hey ho.
Basket/lamp is probably worth blogging separately since is scarcely mind blowing but quite cute
Main focus was on introducing new Educational Informatics students to delights of SL last Friday. Apart from adding last touches to their village, was updating various boxes of freebies and landmarks, creating a special t-shirt and making out instruction sheet..

Was ably assisted, on the day, by Pete and Maggie. However on whole new students seemed to grasp idea v. quickly with minimal box-on-head activity, and leaving scarcely any litter.
After initial induction in the Build area to practice moving about, communicating & buying boxes, used the Mysti chair to zoom round island and then up to their new home, the Educational Informatics village in the sky.

People were keen to claim their new homes, so they learnt how to create textures with name on and upload them - just one student left with no home as yet. Meant was not as much time as hoped for looking at sample of educational places, but a few students went with me to look at Metaphor's boardwalk (as described in previous blog). Fortunately computers behaving much better than last year - not so cludgey and do not crash as often. 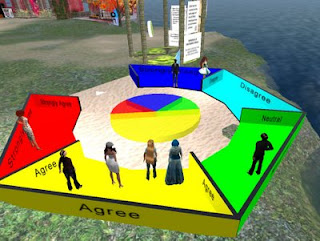 The previous night, had given a tour to a group of Adra's students, from the University of Hawaii.
Started at CILR, looked at first year posters and then again whizzed round on Mysti chair and dropped then in Edu Informatics village. Had set up broom ride to 7 Pillars, and enjoyed watching people setting off on the brooms at regular intervals. From the 7 Pillars, tis but a drop down to the Opinionator. You can see us trying this out: I had made statement "I really like pizza" and people were choosing appropriate response (agree, disagree etc.) Final stop was nearby common room (with its new trampoline). 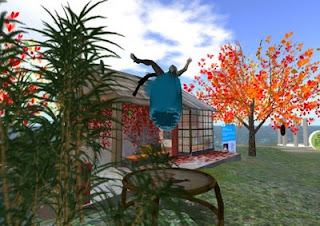 Apparently trampoline got the biggest laugh, so was worth the purchase. This is me, bouncing.
Posted by Sheila Yoshikawa at 19:37