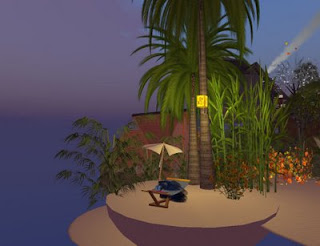 Visitors from GFU: 6 (good); Conferences volunteered for: 1 (good - I think); GIS objects created: 4 (v.good); Dawns watched over Educational Informatics Island: 1 (at least)
Gosh, see that is nearly 2 weeks since last blogged. My how time flies when one is dashing around trying to do RL learning, teaching and assessment whilst maintaining one's SL wardrobe at the cutting edge of fashion.
Have been putting almost-finishing touches to Educational Informatics island, and one evening had to collapse exhausted into a hammock to recover a little before rising refreshed to face a new day of shopping. Island (in sky over Infolit iSchool) is for the RL class Inf6011 Educational Informatics. Idea is that each member (there are only 11 of them) will claim a house. In each house is a poster board with a landmark and notecard giver in it. People have to find an educational place in SL, take a pic of it, and also put in a landmark and write a notecard with an educational critique. They will talk about this in a Show and Tell session after Easter. 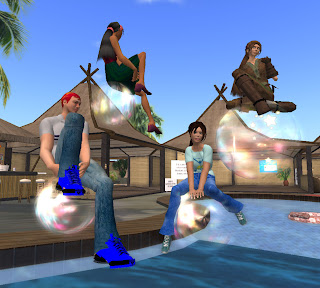 A few more of them have already been into SL, and the thing kicks of properly next Friday. In the meantime I was able to show it off as the final destination on the tour of Infolit iSchool given to educators from George Fox University, led by Robin. Maggie joined us for this last bit, and people seemed to enjoy it (2 middle photos show visit).
There is a tutor's room, where North (who is doing a session for us) will probably put up a link. Also installed Graham's Story Machine which people liked. Am sort of hoping that one of students will want to get to grips with it and do something interesting, as is embarrassingly long time ago that was given a demo by Graham.
Have drifted into organising committee for Virtual Worlds Best Practices in Education conference being held in March - turned up to one meeting and was struck by lack of Europeans so felt should get involved. Have volunteered to chair one session and also suggested a couple of keynotes, one of which (Jackie) was agreed on, so that introduces a European element at least. 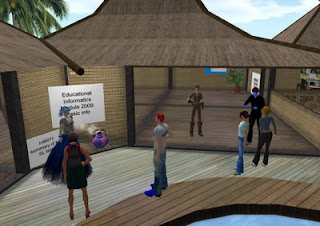 Also have gone to some Educators Coop meetings. With RxTopGun's CSI Austin made mistake of going home and logging in from there. Meant that couldn't see starting video properly, got stuck etc etc so didn't have full experience. Is pity, since is v. cute activity: first you enter a film theatre & see a video showing someone going to a rooftop bar and keeling over dead. Then you go THROUGH the film screen and fall down to the entrance to the building where the crime took place. You tp up to the bar where the woman died and there she is in a dramatic spotlight. Clicking on a board takes you to a website where you get different bits of info and then to have to answer some questions about what happened to her. Should have said earlier that is pharmacy course, so you can see the CSI connection. 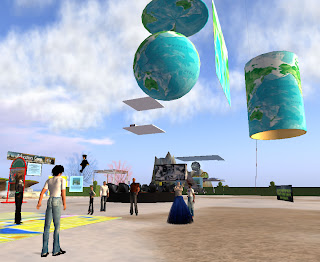 Last meeting was more successful as logged in from work. Gadget gave demonstration of kits used in SL labs for a GIS (Geographic Information Systems) course (see picture). Very cool, and Gadget said that some students had commented about SL enabling them understand more through touching the objects they created with the kits.
Posted by Sheila Yoshikawa at 15:49