TV panels participated in: 1 (cool); Red noses worn: 1 (good); No. of times crashed during panel: 0 (surprising, particularly since was using Voice AND Skype); Knickers worn in SL: None (more information than you probably wanted)

Was IMed by Dousa dragonash on Thursday to ask if willing to be interviewed on Metaverse TV about new proposal to segregate out Adult content in SL. Pretended to know what she was talking about and obviously by time IMed back DID know what she was talking about as had looked at SL blog and seen announcement.
Was feeling zomboid because of long day, and interview would have been at 11pm my time, so said no, but was invited onto panel to discuss issue yesterday night.
Spent bit of time looking at SL blog & discussion threads plus posts on SLED list, but possibly more deciding what to wear. Consulted Dousa who said would be perched on bar stools, therefore shed dress and opted for new slim trousers from Zaara with favourite Ginny jacket and the Swallowtail black branch necklace which is a perfect match.

Teleported in and found Dousa sporting red nose, so donned one she dropped me. An explanation of what red nose signified ensued, as was puzzlement to non-Brits present (note: it is part of Comic Relief, taking place yesterday and raising millions of real pounds). However Robustus, who was doing the filming, said red noses would make it more difficult to film lips moving so they had to be discarded. 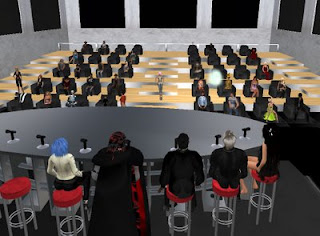 Good audience assembled, lured by promise of racey discussion, however in end we mostly agreed with each other (i.e. in saying it was a dubious idea, given different countries/cultures in SL, the difficulty of policing, the value of having mix of life-experiences etc. etc.) Raciest part was actually after cameras stopped rolling, i.e. conversation about whether were wearing knickers or not - Dousa having indicated that these might be necessary for those sporting dresses, given the height of the bar stools.

Interestingly other panellists felt that adult/PG split was not actually preparation for merger with teen grid, but rather result of wish to get corporates using SL more happily without worrying that their employees were nipping off to sex clubs when they should have been doing customer-facing role play exercises.

In first pic you see us with red noses, and in second pic you see whole panel, plus impromtu extra member (far right) who joined us at the end and then danced on the table during the wrap up. Ah, Second Life.
Posted by Sheila Yoshikawa at 19:02