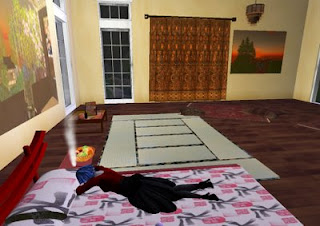 Advantages of SL pretty obvious on this one. Started feeling unwell at Relive08 virtual world conference, but stoically refrained mentioning this. By last Monday afternoon was in RL lying in hospital bed with highly inflamed appendix removed and little conciousness of Where or When. Am now mobile and at home, but in a sort of slow-motion version of RL self with limited movement options and ability to multitask apparently removed with appendix. There will therefore probably not be much blogging going on for next couple of weeks.
Posted by Sheila Yoshikawa at 04:01

Hope you are feeling better. Get well soon! Our best wishes from the team of PIENSL.

Hey, look after your typist, OK? Looking forward to a resumption of blog activity in due course...

Hope you are feeling better. Take care of your typist - this is a good time to just relax and let other people take care of you. Hugs!