Sheila Yoshikawa is, sort of, not at a conference 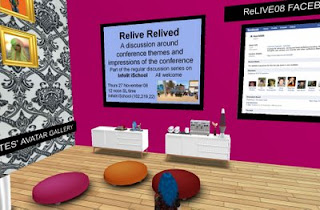 Am in RL attending the Relive08 conference at Milton Keynes in UK. Can meditate later on differences between RL and SL conferencing. Have decided that since is not normal practice in this blog to give coherent, full and objective account of Life, then will not give full etc etc account of the conf either. So welcome to partial (in both senses) account of the Relive conf. Except suppose will edit out more critical observations in case people read blog and then come and trash my sim.
At the moment am listening about someone talking about using SL for teaching English as second language. She has interesting table comparing phsyical affordances of Skype, SL and RL compared. Must be said, most boxes are ticked in all 3. Haven't talked to people much about teaching in Skype although now use it (as evidenced by my Skyping-whilst-Voice-still-on incident blogged previously). 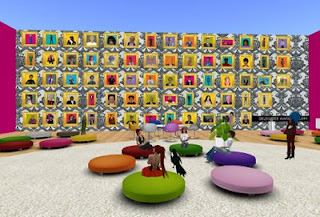 Previous speaker (who I may blog separately) had talked about giving individual their own OpenSim islands to play in first, and speaker is now talking about teaching learners by giving them their ownl ittle mat or platform, but asking them to collaborate too. Of course, North uses dorm rooms for students to furnish, which others have taken up as idea.
Speaker (Margaret) uses the holodeck to create littlke scenes for people to practice their English in e.g. hairdresser, garage, kitchen. Apparently in hairdresser can have hairdresser conversations, something which have managed to almost avoid all my life by only going to hairdresser 3 times a year and keeping my hair long so only spend 10 mins standing up whilst hairdresser attempts to cut round me in a straight line.
"As yet little evidence of language learning communities" - despite the fact that learning environment is good for immersive language learning - is it that people just move into RL when have got enough out of SL learning? Speaker think it may be because ESOL scene is commercial dominated, with people herded in and then not particularly encouraged to stay.
OK well seem to default to trying to get down speaker's point of view at least when liveblogging. Difficult to break habits. Another issue is how to illustrate entry. Am not going to put in RL photos of people, because that just isn't right on this blog. Hmmm. In interim have a couple of pics of the conference SL cafe, including one with my poster advertising discussion session on Infolit iSchool.
Posted by Sheila Yoshikawa at 08:41