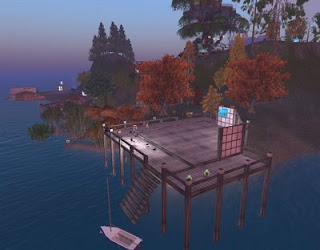 Weeks since last blogging: 3 (v. bad); Buildings to be demolished or gutted: 3 (nostalgic already); No of Halloween hairstyles obtained: 3 (really, really good)
Must be in the blogging naughty corner since is so long since last put pixel to keyboard. Is pointless trying to catch up since one of reasons why haven't blogged is that have been v. busy in SL. This morning was in fact last of sessions where attempt to get whole class of first years into SL and was mistressful exercise in getting 4 x 2 x 3 students** to their various tutors so that they (the students) could be observed practicing interviewing. 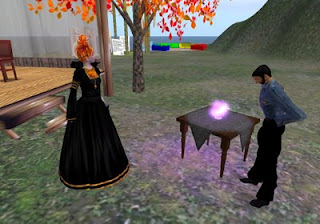 Have taken pics of this and some are not embarrassing so will post them later. In meantime is All Change at Infolit iSchool. The Farradane Centre is now reduced to a wooden platform. Had thought of replacing it altogether with a tea house but somehow this did not seem fair to that giant of information science, Jason Farradane.
Secondly, the old Student Common Room is now replaced by a Common Room for all, staff and students. Was rather proud that had managed to capture that rather desultory and souless feeling you get in a true student kitchenette, but wanted something a bit more welcoming. Saw a post about creator Mudshack on the feeds and it was farewell Linden Dollars as Mudshack do exceedingly cute houses, of which one is now installed and furnished on Infolit. It retains the TV, dishwasher, washing machine, toaster and (of course) the Whack-a-mole. 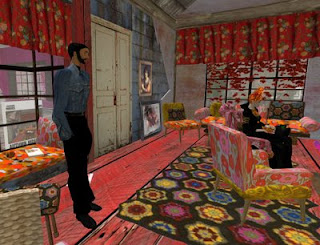 Have my eye on another Mudshack as replacement for Nigl, or rather Nigl's tiki, as I am evicting him due to the biggest change of all. The white and glass CILR building will soon be but a series of brown boxes in my inventory, since I have taken delivery of a large new building which will house both education and Information Studies in what one hopes will be synergistic and rapturous harmony.
The pictures show the new Farradane Centre, Nigl taking his notice of eviction moderately well, and me and Nigl looking like characters from a 70s cottage-sink drama as we view his potential new home. You will see my hair is orange - this is just a halloween thing.
**I mean 3 sets of student pairs, though in point of fact there were just 6 students in the middle batch and I skived off tutor duty.
Posted by Sheila Yoshikawa at 16:38