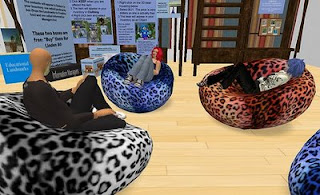 Students inducted: 25 (good); No. of magic carpet rides: 1 (good); No. of typos in responses to Siversprite's questionnaire: infinite (v. bad)
Today was first session of new 1st year BSc Information Management students in SL. Had done much preparation, and this year other members of team are principally Ishbel and Tim, since Maggie can't do Mondays this year. 1st pic shows three of us discussing the session last Friday in the Centre for Information Literacy Research.
Will draw a veil over evening prior to induction session when discovered that in fact some PCs were not supporting SL as previously thought. Will move swiftly to day itself where had prepared posters, boxes, poses for group photo in Moorish House etc. Had tested these poses out with alts, and though Zoe in fact did not have to make appearance Mikael (see below) and Haruki (not strictly an alt, but borrowed) did.
Have yet to get feedback from Ishbel and Tim, but seemed to go fairly well and all were walking, flying, opening boxes etc. In end was easier letting people log directly into SL then offering teleport, since people were coming into lab in batches and by time had booted up email or WebCT to get exact SLURL to click could have zoomed twice round the island. 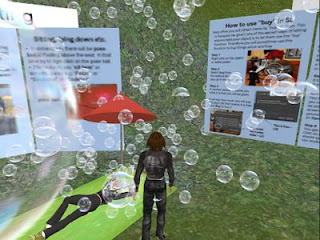 At weekend completed ny responses for Silversprite's latest snapshot of UK higher ed in SL. He came back with query, where I had omitted word, and I noticed that in just that one short sentence there was not only 1 omitted word but also 1 careless spelling. And had thought had spellchecked. Note how ability to write accurate and complete sentences fast declining (e.g. writing "the" as "the" first go is rare occurance). Silversprite emailed that some answers from heavy SL-ers chock-full of mistakes, but he has great fortune to have proofreader as significant other. Sounds v. useful and should perhaps consider ditching own significants for posse of writing assistants and proofreaders, as would certainly boost academic productivity (n.b., joking).
Posted by Sheila Yoshikawa at 15:44