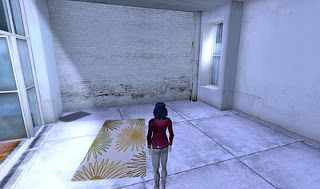 Land set to sale: all in Harm's Way (Moving. But not as moving as had anticipated, actually)
It's my tier date soon, so I decided I really must clear out my land in Harm's Way and at least try to sell it. Know that mainland plots are v. hard to sell at the moment, so set it at about 2000 Linden per 512 and will hope for best. In fact should have split it up into smaller plots, rather than one lump, perhaps will do that tomorrow. If it comes to it, will abandon it, since in the end that might be cheaper than continuing to pay huge tier.

Had only intended to move my new skybox home + its contents(which proved quite easy to do, except there is always SOMETHING you leave behind, can see in first pic that it was a shadow and a rug in this case, also a couple of the potted plants and a saucer). Then started taking & deleting at ground level and decided in the end was better to get whole thing over at once. 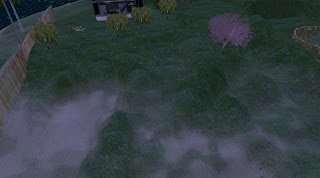 Have had some kind of plot on Harm's Way since summer 2007, and had this particular part of it since November 2007, so may be a shock to the remaining neighbour who has been there as long as me. Managed to go all that time without exchanging a word, I think.
It is a pleasant place, with a sloping grassy hillside ending in beach and water, which is obviously why I liked it. However have just not been spending enough time there, since the views are not nearly as pleasant as when first moved in, and have mentioned lag issues.
Thought would feel quite moved by all this deletion (even more final than RL moving, since in RL one does not actually root out garden and demolish house once have removed furniture, normally). But think must have mentally said goodbye already, or something. 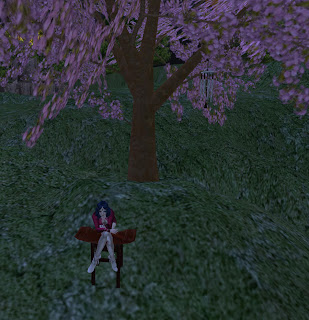 As final act, sat under spreading cherry tree and listened to windchime. This was a present from Ishbel when I got my first home and it has become a sort of ritual to move that last.
It is installed in my new land, so it definitely is home now.
Posted by Sheila Yoshikawa at 18:56

Labels: Deleting, home, moving, reflection, where the heart is