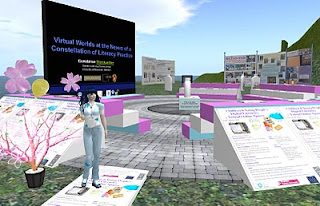 In fact did all the above yesterday: today was digital literacies seminar that advertised a few days ago, where was being Chair and organising venue. Am now in brief post-event Euphoria, and chief desire is to zoom round SL acquiring new clothes and getting new Home to rights (in fact am going to have to do Emergency Marking even if it IS a Saturday night, v. depressing)
May or may not write more about the event on this blog: can legitimately put something on Serious Blog about content. Therefore on this one will mainly concentrate on fripperies i.e. clothes and decoration. 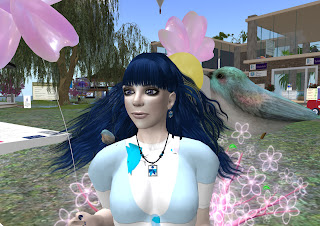 Had already retextured the venue used for ESRC conference in March, picking up colours from cute poster. Decided to push out boat with seminar memorabilia, starting with a skirt using semi-transparent textures of the poster, then to get a bit more creative did t-shirt (the well-worn template from Robin somethingorother) and Jeans (a template on some LL site), using the bluebird from the poster to create patches. Reused bolero template (bought for last event) putting said cute bluebird on the chest knot. Also found some sculpty full perm shoes on xstreetsl (I hope legit, they didn't look good enough quality to be ripoffs) and made blue shoes and stockings to match.
In fact for first time decided that could bear wearing my customised clothing for the event, though with some Shiny Things flats rather than my shoes. The Infolit Week in SL necklace and earrings rounded out the look, and also a small bluebird on my shoulder. 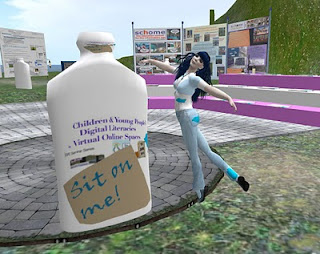 Before this had tinkered around with other sculpties, to make some kind of artifact to put in the pack. Ended up by stretching bottle sculpty, putting a sort of label on it with the seminar banner and "sit on me" and when you sit on it it disappears and you are sitting in a meditation pose in mid air.
This was not altogether deliberate. I WAS intending to put the pose in the bottle, and I was able to change some of the parameters, but I didn't know it was going to disappear when you sat on it (think the script must be assuming it is a pose ball, that you would want to disappear). Didn't work out how to rotate the sitter round 90 degrees either, but in the end thought it was quirky enough to pass muster. You could have a circle of them as seating, then when you all sat you would be suspended in air. Cool or what (don't answer that one) 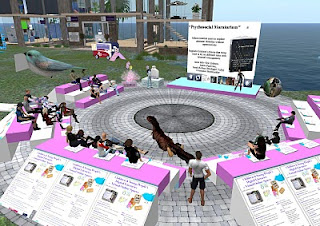 Other disappearing thing that will mention was the floor. The venue floor is taken from the "Cercle" build that used as HQ from Infolit week in SL, rather a nice stone round. When standing about chatting afterwards noticed that half of this had vanished. Also could no longer see a variety of other things e.g. posters, Farradane Centre, half of Hobbiton. Had had a couple of people in the event who dashed around fruitlessly for most of the afternoon (and continued to do so as we stood and talked) so worried that had been griefed. Going back in later, it seems that the buildings are ok, and the posters are back, but the floor isn't. Did I delete it by mistake?
Posted by Sheila Yoshikawa at 14:35