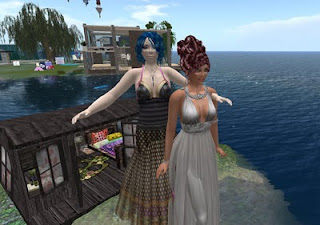 Hours spent trapped in SL: 20 (v. bad); Minutes elapsed between reporting problem and getting fix: 5 (v. good)
Last night was footling about on Infolit iSchool when crashed. Nothing new there, but when tried to log back in, got message "The system is logging you out right now. Your account will not be available until ..." and then it would always give a time that was always 5 mins later than the time I tried to log in. It was v. late so gave up in hope that might sort itself out, and couldn't try again until this evening since am currently in Gothenburg and today was being conference chair for an event about information literacy for which had been lead organiser.
However, when DID try had same problem. Then logged in as Dimitrova and found self hovering in place where had crashed (see pic, Dimi happened to be dressed a la greek goddess at the time). Odd, though was grateful it had happened on Infolit, where am less likely to get bumped around etc.
Anyway, phoned LL at some expense from Sweden and helpful person quickly identified that SL had been "trying to save attachments" after crashing, & failing to do so, obviously, so she just restarted the region and then could log in OK. All attachments in place as well, as far as could tell. One embarrassment was that when asked to spell Sheila Yoshikawa, got v. muddled. Realised that have typed it countless times, but have possibly never been asked verbally to spell it before. May be some message here about literacies, but not quite sure what.
Posted by Sheila Yoshikawa at 14:19