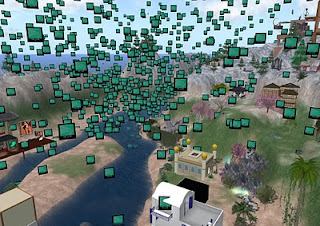 Boxes revolving in water at edge of sim: 1 (v. bad); Boxes replicating from first box: zillions (v.v. bad)
Had first taste of griefing on new land. Was pottering round in Heidi home (positioning a new sheep ornament and modding a straw hat to make it look like Heidi's hat, quite successfully I think) when heard noise and went out to see green screens zooming up.
Turned out there was a box bobbing away in the water, held just outside the boundary of my land. Have land set to no object entry, no build, no scripts, so think that stopped it coming on. However could not move or return it since was in Linden-owned water. 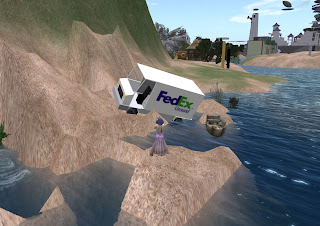 Wondered whether this might be connected to earlier incident, when came across Fedex van crashed into the river bank around the same point and returned it to its owner. Perhaps it had just dropped its Parcel of Doom, perhaps owner though Fedex van looked nice where it was and did the griefing out of spite.
Anyway, realised that despite oodles of sessions on How To Deal with Griefing offered at various conferences, had not really paid much attention, since have experienced v.v. little of it up til now.

Tried to at least put owner of offending object in ban list, but curiously the person picker could not find the name in search. Then started desultry search of SL website for place to report griefing to Lindens. Then as was v.v. late in my time zone, decided that perhaps if just logged off and went to bed, someone else would deal with it. 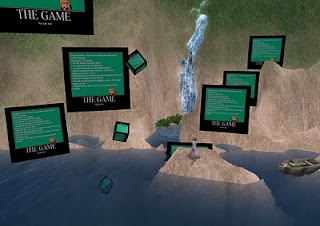 And this morning logged in and voila the thing was gone. So apathy was best policy in this case.
Posted by Sheila Yoshikawa at 16:41