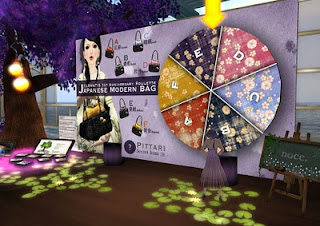 No. of useless gatcha items bought: 2 (good); No. of screens bought that turn out to look too much like hospital screens to be of any use: 1 (bad); No of pans upwards to sky in Screenr screencast: about 6 (good, but cliched)
Am currently in Sweden and today gave talk about SL which will blog about when Danish gentlemen who was doing podcast has casted the pod. In fact have also been v.active in SL, since the not-inexpensive wifi in hotel is also v. good so am getting full money's worth.
However, when came to blog to post about presentation, found various unfinished blog posts, and decided should finish some of them, especially as the pics which had already uploaded are sort of relevant to one of current activities.
In this post, had already made some notes on 6th August, namely: 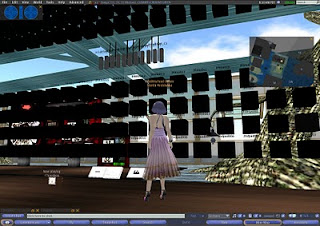 hmm, is almost a poem. A bad poem, obviously. Anyway, will proceed to unpack this.

"Went inworld for 50 Linden Friday house from Turnip's": well, that is pretty self explanatory - a house from Turnip's for only 50 Linden. Bit of a no-brainer. Imagine saw some notice about it on the feeds.
"Saw notecard about Clemetis Gatcha": This arrived inworld whilst was in Turnip's waiting for things to rez, I think. Clemetis do cute stuff, and hadn't come across a roulette wheel gatcha before. The first pic is me having paid my 30 Linden, waiting to see which of the bags I'm going to get.
"Saw installation of ChouChou sound bank": This is the second picture. When you touch the boxes you get different kinds of sound - bells, voices, piano etc. After had played with this a bit:
"Followed creator profile to Chouchou sim": which was next couple of hours gone, basically.

There is this location shown in 3rd pic, of dreamy beach with piano and strange ladder into the sky. 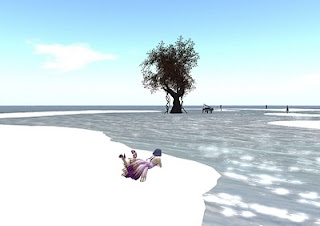 Then there is a cathedral in the sky and finally a place where you can encounter all the music boxes that I found initially, and buy them.

"Thought was worth a screenr" this was initially because I bought (free) and wore the cinematic HUD on ChouChou, which makes the camera sort of drift round you. I thought what a cool machinima this would make, so dug out my Screenr skills. At once discovered that I couldn't use the HUD when activating screenr, but still ChouChou is v. cool place, so in the end (after junking a number of false starts) made Screenr video. Tha tis embedded at the end of this post. It is silent, idea being that you listen to ChouChou music while you play theScreenr.

"Uploaded it to youtube" naturally. But wasn't totally satisfied with it so didn't upload it to Flickr
"meanwhile
ppt is relutely refusing to upload. whyowhy"
This was the ppt that presented today in RL in Gothenburg. Had put in "placeholder" ppt so could get Slideshare URL for presentation even before had uploaded it. You are supposed to be able to replace one presentation with another version, but essentially could not get this to work after several tries, so inend uploaded it as new. Never did find out why replacing hadn't worked.

Posted by Sheila Yoshikawa at 17:10