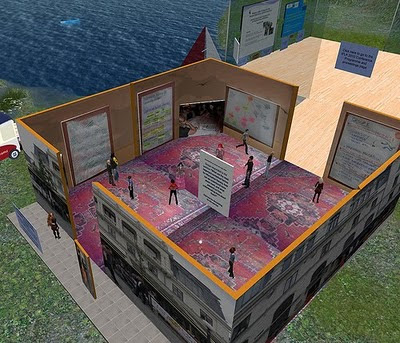 Have had fairly active week in SL. Most constructive part is probably making the exhibit for IFLA conference discussion. Had originally spent happy hour whilst still in Gothenburg, sifting through houses in inventory to find suitable venue, and settled on older Japanesey building, like one that used to house CILASS in dim and distant. Had got all posters from satellite conference set up, but fact was that it looked a bit messy.

Then had idea of taking pics of RL Gothenburg venue (the Palace) and using these to texture the walls and floor. Is not exactly work of art but think it has nice feel and is at least distinctive & could set it to copy if so desired as is all own work. Completed this box with all the posters, some RL pics, and a board with all the delegates’ names and the briefing for the exercise that produced the posters. Also could not resist a bit of set dressing with a table rather like the ones in the RL venue, a cup, a pencil holder and a pic of a RL poster on a table top. 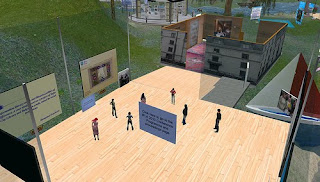 To house powerpoints, chose same building as the Wilf Saunders Library, a simple wood floor and glass walled box. Discovered in process that creator of this (who also created the Victorian Steampunk sky platform and the thing I used originally as the Departmental office building), is no longer selling homes. Sad. Think they were ahead of their time, at the time (i.e. 2007) but suppose things have moved on.

After putting in selected ppts, and doing some notecards with abstracts and some links to other stuff, created walkway between two buildings with paving and boat, to evoke Gothenburg harbour At least that’s the idea.

Seemed to go down well with people on Thursday, though is scarcely rocket science. Since then have added noticeboard for people to add their own thoughts about Contextual Factors for Information Literacy (that is, if they can work out how on earth noticeboard works, and then manage to type in their thoughts in a mere 30 seconds, no mean feat). Also, by chance, acquired set of Swedish flags: one you wear and wave, one small one to put on table top (so put it on table top) and one full sized flag on pole which waves just like in the Torley Tutorial.

Additionally have small rabbit in Swedish colours, holding carrot and Swedish flag (not sure if carrot is symbolic of anything). These all were acquired because yesterday was setting up a tableau with a diagram of the Information Literate University to create some graphics for a ppt that am giving in RL in Uppsala in a couple of weeks time. Uppsala is also in Sweden, and, finding that lacked Swedish flag, visited the Swedish Institute sim, where hit jackpot. Appears to have been some kind of high-profile wedding celebration, and were boxes lying around containing said set of flags, and rabbit. Only expense was that almost by mistake bought fairly dull heart-shaped cushion in Swedish colour scheme, for 59 Linden. Oh well. 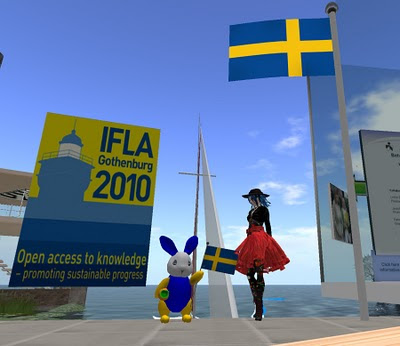 Anyway, after event on Thursday, but before whiteboard and flags, did a quick Screenr screencast for those unfortunates who cannot see the exhibit in SL. Only real regret is that had just changed outfit: Sugarcube had produced a dress for the first time in ages, which was a “50 Linden Friday” item (or is it “60Linden Friday” now?) Whatever, the dress is a shortish fluffy red thing with amusingly patterned leggings. Married this with stiletto boots from G. Field, a black shrug, black tights to bridge gap between pants and stockings (so am covered up, that isn’t the issue) and then some free hair that acquired in Curious Kitties. This was a few days ago when decided that time had finally come to invest in a couple of Curious Kitties hair HUDS, without which you cannot control colour of their most recent hair.
Free CK hair had big black hat, and actually think that hat balances skirt quite well, but, still, it is all a bit red and black and patterned, and might have been better advised to go conservative route for something which after all am publishing on Youtube. Witchy black hats was possibly not image aiming for. Of course, could junk the video and do another – but – frankly – is it worth the effort?
No.
Is possible people might like the hat.

Posted by Sheila Yoshikawa at 04:40