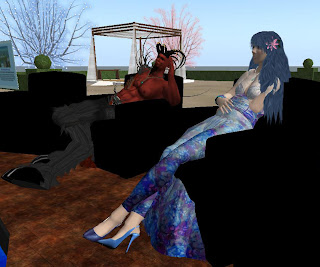 Educators Coop chats attended: 1 (good); Pigs acquired: 2 (toxic); Drugs pushed: 1 (legal)
Attended usual Friday Educators Coop chat. Loretta and North were there. North (pictured with me) has been house hunting - he has new job, but as he points out a plus of working in SL a lot is that you can stay with your community even when you change jobs.
Anyway when there was a suitable gap in conversation I asked whether anyone has full perms pig, and it turned out that North had 2, one a flyable pig, and one which emits pink particles. Also I rezzed the molecule that Graham had given me and Loretta, who had actually taken the drug in its non-virtual form, got a copy. Thus do learning objects flow pleasingly around SL.
Initially thought that particle pig was a bit too disruptive for build but 2nd thought was he could symbolise the flu, and now all I need are some full perm face masks or body suits (as fun preperation for going round build).

NB do know that actually face masks are not much use in RL, but, hey, this isn't RL.

NB2: Unfortunately flying pig can only be flown by me. Sorry
Posted by Sheila Yoshikawa at 17:55