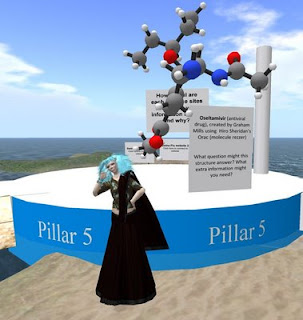 Emo animations bought: 1 (hypnotic); Swine flu builds started: 1 (good)
Today was a busy SL day. In the evening was the New Media Literacy discussion with Marty Snowpaw. Link to chatlog is in previous blog entry. Was good discussion, with a few people (I think) who hadn't been to Infolit ischool before and afterwards chatted to Kali.
Before that had spent some time altering the "Bird flu" 7 Pillars of Information Literacy build, to make it a "Swine flu" info literacy build. Idea is that people will be able to contribute own swine flu example questions, and plan an "infolit idea & build" session for 4th June.

Build certainly isn't complete, but have got enough there to be worth visiting (I think). Altered some of the examples of sources to compare & as had noticed that Graham had mentioned flu-related molecules asked him if he had a LM to one. He came up trumps and rezzed a molecule for an anti-flu drug [corrected from "vaccine", see comment]- you can see me standing with it.

Currently people can buy Bird Flu build for 0 Linden (perhaps shoudl advertise this more) and idea is that people will also be able to get hold of this one free too, though obviously it needs both space and spare prims to rez. At the moment it is on ground for easier access, but once is built, intention is to float it into sky.
. 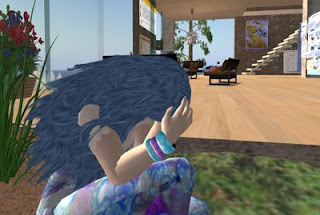 Was in fact day when comparatively few Linden were spent but whilst in Schadenfreude (I forget why - oh yes, I was considering getting some ties as a gift) I bought an Emo animation. You go through some weeping motions and then sit looking self consciously bereft before starting all over again. I have now managed to place this in a pose ball on the planter in front of the Centre for Information Literacy Research (thus the title, referring to the classic by Elizabeth Smart) for those who come over all emotional at the sight of so much information literacy.
Posted by Sheila Yoshikawa at 17:27

I seem to be in pedant mode today. It's a drug rather than a vaccine and we're supposed to call it H1N1 apparently rather than swine flu (in case the pigs sue us?).

No it's not pedantry if I made a mistake! I have corrected the vaccine/drug part (I hope) - I think I really knew the difference so that was just sloppy (or perhaps I copied it from Wikipedia???)
I will try and call it H1N1 in future, though one information literacy issue is that because people are using the phrase "swine flu" in articles about it, you might miss out if you just used H1N1 as the search term for that concept. However, just using H1N1 would make sense if you wanted to cut out the more populist non-clinical articles.
On another note - the temptation to have pictures or 3D models of pigs is just too tempting to resist. On Karuna (where, irritatingly, there is a forced landing point) the easiest way to spot the cluster of resources about H1N1 is the pig they have flosting over them, so it actually becomes an aid to SL browsing for information.

Oh, I must try this emo ball. My daughter would approve!

Yet another correction, this time to my Comment - it was Healthinfo Island, not Karuna, that has teh H1N1 info.